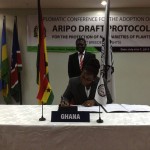 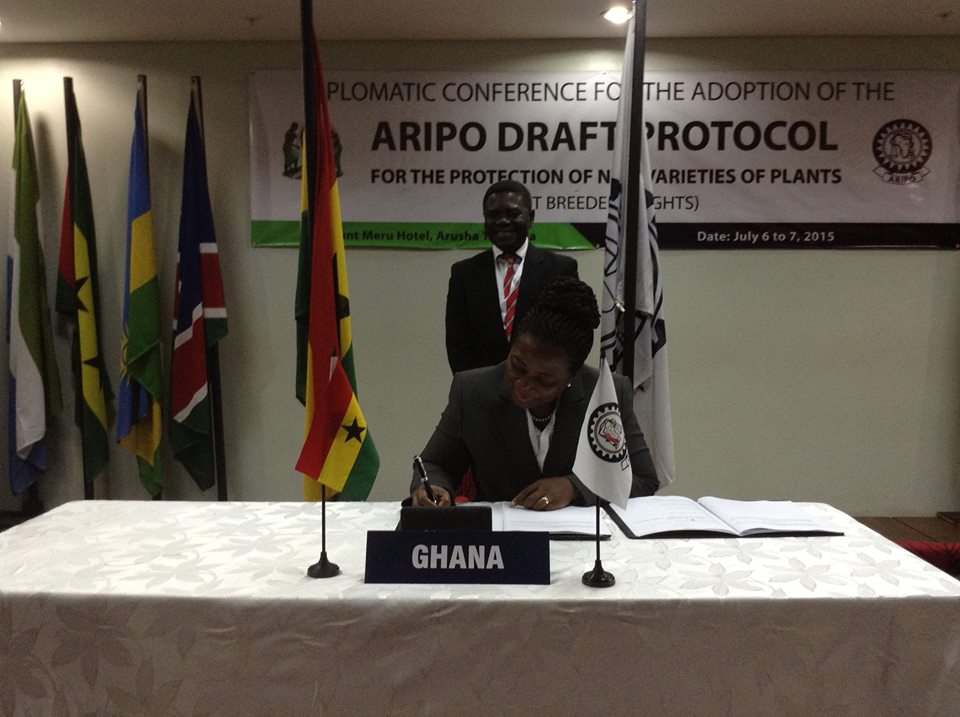 Who represented Ghana? Who signed this on our behalf and by what justification?
By Food sovereignty Ghana, Tuesday, 29th September, 2015

The forces that want to pass the Plant Breeders Bill against the will of the Ghanaian people have not given up. The bill is currently suspended in Parliament. But USAID has been working overtime with their cronies in Ghana’s government to impose the same bill on Ghana from outside as an international trade agreement. The African Regional Intellectual Property Organisation (ARIPO) Protocol New Plant Variety Protection Protocol, dubbed “Arusha Protocol”, was adopted in Tanzania when ARIPO met on June 28-July 1. It is nothing but an attempt to smuggle the Plant Breeders’ Bill through the back-door. and to impose the same bill on Ghana, this time from outside as an international treaty.
Like the Plant Breeders’ Bill, the ARIPO Arusha Protocol is UPOV-91 compliant. Like the Plant Breeders Bill, the Arusha Protocol gives up Ghana’s sovereignty, and the sovereignty of every ARIPO member country to foreign multinational corporate plant breeders. Like the Plant Breeders Bill, the ARIPO Arusha Protocol will criminalize farmers saving and sharing seeds. The notorious Clause 23 of the Plant Breeders Bill is identical to Article 25 of the ARIPO Arusha Protocol, ceding national sovereignty, and putting multinational corporations above the laws of Ghana.ARIPO met in a closed secret meeting on June 28 – July 1. The names of the delegates were not made public to avoid democratic scrutiny and accountability. This small, secret, and arrogantly anti-democratic group felt entitled to decide on the fates and livelihoods of millions of farmers across the African continent without consulting the farmers. The delegates were far more interested in representing their neo-colonial friends in USAID and the G7 rather than their fellow Africans. Farmers were not welcome. Farmers groups were denied entry.

This is another colonial attempt to steal the birthright of Ghana’s people and the birthright all the people of Africa. Ghana needs to stop permitting these thefts, birthright thefts that have continued during centuries of colonial exploitation. The ARIPO Arusha Protocol allows plant breeders to steal the DNA of Ghana’s seeds, Africa’s seeds, patent them, claim them as their own intellectual property, and charge the farmers any price they wish because the farmers are then forced to buy them back.

When a country adopts a UPOV-91 law, local seed companies are quickly bought up by the big international chemical companies that produce seeds, primarily Monsanto. It is an illusion that local or indigenous plant breeders will benefit. That has never happened. Monsanto and the other multinationals either purchase the smaller local companies or force them out of business, claiming rights to all their seeds in the process. The farmers are left with no choice about where they buy seeds. And by patenting and claiming property rights to the local DNA, the big seed companies can prevent farmers from saving and using the seeds they have used for centuries, because now a big multinational company “owns” the genetic material in those seeds. The farmer must pay the company to use his or her own seeds. The only reason a multinational owns the indigenous genetic material is that it was permitted by a UPOV-91 law like the Plant Breeders Bill or the ARIPO Arusha Protocol to steal that genetic material.

Ghanaians reject the Plant Breeders Bill because it criminalizes all traditional farming by criminalizing saving, using, sharing and selling seeds. Ghanaians reject the Plant Breeders Bill because it allows foreign corporations rights above the laws of Ghana. The ARIPO protocol is an attempt to impose the same law from outside the country because so far, USAID, the G7 and the multinational corporations have not been successful in forcing Ghana to pass the Plant Breeders Bill. The USAID G7 and their corporate sponsors know they cannot win and gain control for their profit windfall by democratic means. So they are trying to make a procedural coup to take over Ghana’s agriculture.

Ghana’s farmers’ rights to their seeds are protected by the ITPGRFA Treaty, The International Treaty on Plant Genetic Resource for Food and Agriculture, to which Ghana is a signatory. But Ghana’s representative to the secret Arusha meeting ignored the treaty and ignored the farmers. We want to know why? Above all, we ask every Ghanaian to remain vigilant and make sure the rest of our lawmakers ask the right questions and refuse to ratify it as it heads to Parliament.

ARIPO is currently calling for a speedy ratification of the Protocol. Considering the secrecy that has surrounded it from the beginning, we call on every Ghanaian to remain vigilant and stop any attempt to sneak it into law. Do not allow Ghana to ratify the ARIPO Arusha Protocol. Do not give in to neo-colonial greed. Let your MP know you oppose the protocol just like you oppose the Plant Breeders Bill. Either one will have the same effect on Ghana. Either one puts our farmers out of business and allows foreigners to completely control our food. If outside forces control our food they control our people and our nation.