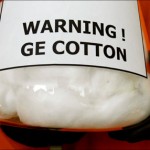 Field trials of GMO cotton, genetically modified Bt cotton, have been going on in three northern areas in Ghana, according to a news report published by the Graphic on Monday, 29 June 2015. With Ghana being a signatory to the Cartagena Biosafety Protocol, the very decision to approve the application for the so-called “confined” field trial of Bt. Cotton, ought to have involved public awareness and participation.

Article 23 of the Protocol requires Parties, on their own and in cooperation with other States and international bodies, to promote and facilitate public awareness and education, including access to information, regarding the safe transfer, handling and use of living modified organisms (LMOs). It also requires Parties to consult the public in the decision-making process, to make public the final decision taken and to inform public about the means of access to the Biosafety Clearing-House.

In the absence of all these regarding the very application for a “confined field trial”, Food Sovereignty Ghana was astounded by the announcement that, “A scientist at the Yam and Cotton Breeding Programme of the Savanna Agricultural Research Institute (SARI), Dr. Emmanuel Chamba, has confirmed that Bacillus thuringiensis (Bt) cotton trials in the three northern regions of the country have yielded positive results”!

Interestingly enough, from the very same article we gather that there is no market for cotton in Northern Ghana. Dr Emmanuel Chamba, claimed farmers are impatiently waiting for the GM cotton. But it is hard to imagine why they would ask for Bt cotton if they have no place to sell it, particularly if they have to pay higher prices for the seeds and the chemical inputs necessary for any GMO commercial crop.

A rather pathetic spin the SARI scientist put on the eagerness of the farmers to “embrace” the Bt cotton, also exposed the ineffectiveness and the incompetence of the National Biosafety Authority, and Ghana’s law enforcement in general:

“There are reports from the three northern regions that some farmers have sidestepped the regulatory system to plant Bt cotton seeds they brought in from Burkina Faso and are recording positive yields”. If this were true, it would be his responsibility to report this to the appropriate authorities, rather than narrating it to the media with glee.

One fact that comes out clearly in Dr. Chamba’s revelations of the illegal “confined field trials” of the Bt cotton is the disturbing lack of professionalism and sense of responsibility expected from a scientist who ought to know better. The very fact that the “confined” field trials were simply left in the hands of farmers rather than trained scientists is most alarming indeed, as we gather that, at least, in one location “the farmer could not go according to instructions”!

Although there appears to be nothing legal about the Bt cotton field trials, the article says they expect Bt cotton to be approved for commercial production soon. So if foreign corporations want something that is illegal in Ghana, Ghana’s politicians appear happy to just change the law to make it legal.

Every time a GMO crop is introduced, the seed industry and their political and academic shills make extravagant claims, loudly proclaiming better quality, higher yields, resistant to drought, etc. The reality soon turns out to be much different.In a recent opinion piece, Cottoning onto the lie: GM cotton will harm not help small farmers in Africa, Haidee Swanby from the African Centre for Biodiversity (ACB) shows how GM cotton has impoverished smallholder farmers due to the expense of the technology coupled with inevitable technological failures associated with GM cotton crops. The paper states:

“Scrutiny of actual experiences reveals a tragic tale of crippling debt, appalling market prices and a technology prone to failure in the absence of very specific and onerous management techniques, which are not suited to smallholder production.

As stated by a farmer during a Malian public consultation on GMOs, “What’s the point of encouraging us to increase yields with GMOs when we can’t get a decent price for what we already produce?”In Burkina Faso, the tide turned against GM cotton after just five seasons as low yields and low quality fibres persisted. In South Africa, GM cotton brought devastating debts to smallholders and the local credit institution went bust. Last season, smallholders contributed to less than three percent of South Africa’s total production.”

For smallholder farmers growing on tiny plots, GMO crops quickly become more vulnerable to pests, not less. With tiny plots, cross contamination of non-GMO crops is certain. Farmers soon begin to experience devastating losses. Seed industry corporations can wait for the smallholder to be forced out of business by debt, buy the land cheap, and leave farmers and their families with nothing. This is made even more certain by legislation such as the Plant Breeders Bill or the ARIPO New Plant Varieties Protection Protocol, which prevent farmers from saving and replanting seeds. Farmers are forced to buy new seed each year from the seed industry monopoly that can set any price it wants.Dr. Chamba says that only one company is making any attempt to produce and market cotton in northern Ghana, “only Wienco is attempting because it has put cotton under its maize programme.” That gives us a big clue to the real GMO agenda. The real objective is to grow the real money maker in Ghana, genetically modified Bt maize. There are already input subsidies in place for maize. This would be devastating to Ghanaian farmers and the Ghanaian diet. Farmers would incur crippling debt buying the expensive seeds. Pollen drift and contamination make GMO maize a threat to all Ghanaian varieties of maize.

This exact threat to other conventional varieties of maize is what informed Mexico’s decision to ban GM maize in 2013. The Bt cotton, which has no market, is just a way of getting the GMO foot in the door to pave the way for Bt maize. Most of the money made from Bt maize would exit Ghana, creating more wealth for foreign corporate interests, and mounting debt here in Ghana.

Public opinion has been clearly against genetically modified crops in Ghana. Only the political and academic elites, who are listening to the G7 and USAID corporate enablers, and who think they may make big profits for themselves, are desirous of growing GMOs in Ghana. They don’t mind selling out their country and fellow citizens to big agricultural multinational corporations. Or they may be fooled by the corporations, the G8NA, and USAID into believing the false hype and bogus claims. The GMO enablers are hedging their bets and trying to co-opt the leadership of all political parties.

Aside from the negative health implications of GMOs, this high level technology is not workable for subsistence level farmers operating on very small plots of land. The global cotton market is highly competitive and unstable. High input costs are already annihilating profit margins. To promote more expensive technologies that have already proven unworkable for smallholder farmers in African countries is foolish and self-destructive for Ghana.

Our political leadership needs to focus on building Ghana. Rather than undermining farmers, poisoning consumers, and destroying Ghana’s ecosystems and agriculture with GMOs, Ghana’s politicians need to listen to the people who elect them. Public opinion is resoundingly against GMOs. There is no science anywhere demonstrating GMOs are safe. There is disturbing evidence from many quarters that GMOs and their attendant chemicals are an economic disaster for agriculture and a health disaster for the people who live in their proximity and the people who consume them.

Our political leadership appears determined to blanket Ghana with GMOs entirely against the wishes of Ghanaians. They are pushing to get this done before people catch on to what is happening. They know that if Ghanaians realize what is going on they will be angry and it will show in the way they vote. We must tell our local officials and our elected representatives we don’t want Bt cotton or Bt maize in Ghana. NO to GMOs! NO to Bt Cotton!

For Life, the Environment, and Social Justice