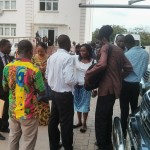 On Wednesday, 4th December, 2013, Food Sovereignty Ghana FSG met with the Parliamentary Committee  on Constitutional, Legal and Parliamentary Affairs. The meeting was in  response to an invitation, as a result of an earlier petition to parliament on the plant breeders bill 2013/ served on the Committee by FSG. The FSG  delegation of eleven comprised of Mr. Duke Tagoe, Deputy Chairperson of  the FSG, Mr. Kweku Dadzie, Secretary, Ms. Samia Nkrumah, Chairperson of  the CPP, Mr.  John Yaw Opoku, Mr. Ras Aswad Nkrabeah, Blakk Rasta, among others.

DAVID VERSUS GOLIATH
If the FSG did not know what we were  talking about, it would have been a mission impossible. The meeting was  fully attended. There were all the key persons connected with  biotechnology and pro-GMO experts in the country present to defend the  Plant Breeders Right or PBR. Also present were the Director of the CSIR,  together with all the Heads of Departments of the CSIR. each department  with its lawyer. The Attorney-General and Minister of Justice was also  present, with her secretary. It was obvious that they had come fully prepared. All of them came  with copies of all the statements ever issued by FSG. It was clear from the beginning that the main intention was  to punch holes into our petition. The impression of the atmosphere was  one of a determination to challenge every item in our petition, not only  to make sure that they would collapse our argument against the PBR, but  also to discredit the FSG as an organisation.

GMOs AND PBRs
There was an attempt to ridicule our connecting the  Plant Breeders’ Bill to the issue of GMOs. We were told categorically  to get it straight that the Bill had nothing to do with GMOs! This was  buttressed by the Attorney-General and Minister for Justice, who  vehemently condemned the link as being non-existent. What saved the day  for us was an intervention from Professor Walter Sando Alhassan who  stepped in to clear the misconceptions, and making it clear that the  Bill had everything to do with GMOs. We shall soon be coming out with a  separate article on this issue.

CLAUSE 23
Another point in the petition which came under intense discussions and scrutiny was Clause 23 of the Plant Breeders’ Bill:

23 Measures regulating commerce.
A  plant breeder right shall be independent of any measure taken by the  Republic to regulate within Ghana the production, certification and  marketing of material of a variety or the importation or exportation of  the material.”

The objections by FSG to this particular clause were unassailable.  The FSG petition recommends “ix/ Delete Section 23 on Measures  regulating commerce.” FSG position is that it is important for the Bill  to be coherent with other legislation and national interests such as the  protection of environment, health, prevention of misappropriation of  genetic resources etc.

The inclusion of Clause 23 hinders the ability to achieve such  coherence as it views the grant of PBR as being independent from other  regulations. In certain cases it may be important to refuse to grant PBR  over a variety, particularly where national interests are at stake.  Such situations include not granting PBR on varieties that are injurious  to public health, environment etc or where the application does not  disclose the origin of the genetic material.

UPOV 91
An area where we strongly disagree is why  the government opted for UPOV 91 in the first place. The Bill is  presented, first and foremost as being in fulfilment of the requirements  of UPOV 91, which incidentally is also in conformity with the WTO  rules. We can fulfil our WTO obligations without UPOV. We do not need  UPOV. It is a very restrictive and dangerous trap into a permanent  enslavement and loss of our sovereignty as a people. This is what is  staring at us in the face. Our destiny as a people is involved in which  decision our Members of Parliament make.

Ghana is a member of the World Trade Organization and the  rights and obligations concerning intellectual property are governed by  the WTO Agreement on Trade Related Aspects of Intellectual Property  Rights (TRIPS Agreement). According to Article 27.3(b) of the TRIPS  Agreement, Ghana has to provide protection of plant varieties by an  “effective sui generis” system. Sui generis means “unique”  system of  protection. This provision allows Ghana maximum flexibility in the  design of plant variety protection (PVP). This means that Ghana has the  option of using this flexibility to innovatively design a PVP system  that reflects the conditions prevailing in Ghana. This is what many  advanced developing countries such as Thailand, Malaysia, India have  done. The African Union Ministers have also recommended a unique Model  Law for Plant Variety Protection.

The bill ignores all of these developments. The Bill presented is  neither innovative nor does it reflect the conditions prevailing in  Ghana. It is simply based on the 1991 Act of the Convention for the  Protection for New Varieties of Plant (UPOV 1991), a restrictive and  inflexible legal regime. UPOV 1991 came about with the development in  industrialized nations of large scale commercial farming and  professional breeding focused on producing uniform varieties. UPOV 1991  is extremely rigid, with very limited flexibility given to governments  to accommodate their socio-economic conditions.  UPOV 1991 is also in  conflict with the International Treaty on Plant Genetic Resources  (ITPGR) as the terms of UPOV 1991 does not allow full realisation of  farmers rights.

Thus to date of 71 countries that have signed up to the UPOV  Convention, only about 22 countries are from developing countries and  most of these are members of UPOV 1978, while most developed countries  are members of UPOV 1991. Compare this with the 166 number of countries  which have signed up to the Cartagena Protocol on Biosafety and to the  Convention on Biological Diversity, which is even much more recent. It  is not for nothing that at present, in Africa only Morocco and Tunisia  are signatories to UPOV 1991, while Kenya & South Africa are  signatories to UPOV 1978. The previous Convention of UPOV 1978 is no  longer open for ratification and new members are only able to join UPOV  1991.

The rigidity and inflexibility of UPOV 1991 and the failure to  appreciate the varying needs and conditions of developing countries has  deterred many developing countries from joining UPOV 1991. It is thus  not in the interests of Ghana to adopt a Bill based on UPOV 1991 or to  join UPOV 1991. Ghana should investigate and explore other models on PVP  (e.g. The Indian PVP law, the AU Model law) and design its own PVP  regime based on its own needs and priorities in particular the interests  of its farmers, its food security needs.

CONCLUSION
In the current Bill the farmers rights are subject  to  the discretion of the Minister of Agriculture, whilst the rights of   foreign corporate plant breeders are put above the state! The Committee   insisted that they had already put laws in place to protect the  Ghanaian farmer, although FSG has not seen evidence of this.

On the issue of Clause 23, the Committee admitted it was  worthy of consideration. Also accepted for further consideration was the  issue of linkage of GMOs with the Plant Breeders’ Bill.

After a passionate appeal from Ms. Samia Nkrumah, calling on the Committee to carefully examine the petition, the Chairperson of the Committee promised the petition would be given due consideration, and thanked Food Sovereignty Ghana for making our concerns available.The meeting lasted for almost two hours. We shall be coming out with a full report soon.