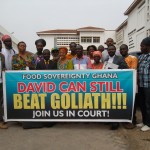 The Fast Track High Court Human Rights Division in Accra today sat for the third hearing of the case submitted by plaintiff Food Sovereignty Ghana (FSG) against the Ministry of Food & Agriculture and the National Biosafety Committee, the newly inaugurated National Biosafety Authority, as well as the Attorney-General’s Department.

Judge Anthony Kwadwo Yeboah who had presided over the last two hearings handed over to the original Judge assigned to the case, Judge Kofi Essel Mensah who had been on leave.The counsel for the plaintiff, Lawyer Tetteh Wayo informed the Judge that despite serving the defendants with the amended writ of summons and corrected exhibits as directed by the Court on 3rd March 2015, he had still not received any documentation from the defendants processes so filed, even though the Court seemed to have copies of processes filed by the defendants. He therefore enquired whether or not the defendant (The State) would want to proceed with the case without serving the plaintiff’s lawyer?

FSG welcomed the presence of the Convention People’s Party’s (CPP) Chairperson, Honourable Samia Nkrumah and her contingent of supporters and legal advisers who appeared in court to show solidarity with their noble cause. According to her the issue of Ghana’s food security cannot be left in the hands of foreign interests and should rather be in the control of our local farmers. She cited several examples of responsible decisions regarding the control of GMOs being taken by many governments abroad in the interest of their people and urged Ghanaian policy-makers to emulate such best practice. FSG wishes that other political parties would also show solidarity in the interest of Ghana’s people and her environment.

The Attorney General’s (AG) Department and the recently launched National Biosafety Authority had at the last appearance on March 3 requested to be joined to the original suit as 3rd and 4th defendants respectively. In an ironic twist on March 4th 2015, a day after the first submission of the writ, the National Biosafety Authority Board was inaugurated and advertised in the local dailies. This in hind sight seems like a preemptive attempt to make right what had been the original reason for which FSG went to court. The Legislative Instrument 1887, the Biosafety (Management of Biotechnology) Regulations, 2007, requires provision of the following: Section 14 Public awareness, participation and education; Section 15 The Biosafety Clearing House and Information; Section 16 contained use and confined field trials; Section 26 Socio-economic consideration.

Ghana is a signatory to the Cartagena Protocol on Biosafety which requires the State to embark on a widespread public education, awareness and participation campaign to engage all stakeholders on the entire issue of GMOs before any release into the environment or commercialization can take place.

The case was first heard on February 17th 2015. Food Sovereignty Ghana is a grass roots movement of Ghanaians home and abroad dedicated to food sovereignty in Ghana. FSG shall continue to pursue through every legal means possible to ensure that the rights of our farmers, consumers and the serenity of our environment as provided by our constitution is guaranteed.

PHOTO shows members of the FSG and sympathysers who turned up in court this morning, including Hon Samia Nkrumah, Chairperson of the Convention People’s Party, and Ghana for Agroecology.