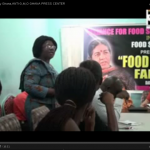 “I want to talk about the Plant Breeder’s Bill!” – Dr Margaret Ottah Attipoe

A Press Conference organized by Food Sovereignty Ghana last week Tuesday was almost sabotaged by Dr Margaret Ottah Attipoe of Centre for Scientific and Industrial Research on the grounds that she had something to say on the Plant Breeders Bill and GMOs!

The press conference which was organised by Alliance for Food Sovereignty in Africa in collaboration with Food Sovereignty Ghana, on the theme: “Food Sovereignty and farmers’ rights”, sought to meet the press and give the opportunity for Dr. Shiva to put her message across. on the need to prevent the promotion of genetically modified (GM) foods, and to resist the Plant Breeders’ Bill.

This is a busy-body that is beyond the call of duty! The unruly behaviour is a shame to the CSIR which continues to see nothing wrong with her misdeeds! Her attempt to misrepresent Dr. Shiva was roundly answered. These people are clearly alarmed at the stature of Dr. Shiva and seek to present her as only being a philosopher.

Just before her arrival, another article, published by Professor Josephine Nketsia-Tabiri, in which she falsely claimed that “Shiva has repeatedly claimed academic qualifications that do not apparently exist. She always refers to herself as Dr and mentions her PhD in physics – yet actually her doctorate was in philosophy, attacking a branch of quantum physics”.

Dr. Aktipoe must have only attended the Press Conference with a view to disrupt it. In the end, she ended up disgracing herself! She could not pronounce what even secondary students know: the word “philosopher”! She said “philosophist”

Here are the exact accusations Dr. Aktipoe made against Food Sovereignty Ghana on  Joy News At Six, Sunday, 13th October, 2013:

Transcript of Joy News At Six, Sunday, 13th October, 2013. Listen to the audio recording of the programme here:

JEFFERSON SACKEY: It’s six o’clock. Good morning and welcome to Joy News at six. This bulletin is live from our studios here at Joy 99.7fm in Accra, also live on LoveFM in Kumasi, as well as on my Joyonline.com… Coming up, President Mahana… And also CSIR dismisses fers raised by Food Sovereignty Ghana that consumption of genetically modified food could be harmful to one’s health…

My name is Jefferson Sackey, the details of the news now…
The Council for Scientific and Industrial Research is dismissing fears raised by advocacy movement, Food Sovereignty Ghana, that the consumption of genetically modified foods could be harmful to one’s health.

The movement yesterday, marched through the principal streets of Accra, to put pressure on the government to halt on-going processes to introduce GM foods into the country.

These fears are that its consumption could cause kidney dysfunction, as well as cancer tumours and others.

Duke Tagoe is the Deputy Chairperson of Food Sovereignty Ghana:

DUKE TAGOE: There are many scientific experiments which have been conducted, and most of them are bringing us so much evidence which shows that GM foods have some negative side-effects on human beings.

They are taking place in Europe, in America, in Asia, in Latin America! Everywhere GM foods have been cultivated, people are suffering!

Only recently, a farmer in Burkina Faso, has reported to the BBC that after the cattle went to graze or to feed on a previously cultivated GM Bt cotton field, some of these cattle started dying, which means that there are problems with GM foods.

JEFFERSON SACKEY: Duke Tagoe there. Well, he is the Deputy Chairperson of Food Sovereignty Ghana.

Well, GM foods are produced from seeds that have had their genetic make-up tampered with through the introduction of genes from non-related organisms using lab…

Dr. Margaret Attipoe of the CSIR tells the Joy News that their fears are unfounded:

MARGARET ATTIPOE: The activists, anti-GM activists, have to tell you something to frighten you. It is the fear, you know, that scares people off.

People are writing all kinds of things. There was a study recently, and when authorities from the field of genetic modifications and genetic engineering looked at it from different countries, they came out publicly to tell the whole world that it has no merit.

This is what people are doing. I know, and I have information from all over the place, there are people behind these people, who are being paid and giving them money to talk against GM foods without having concrete information about the technology and the modalities involved.

Sometimes what they come out with is just outrageous.

JEFFERSON SACKEY: D. Margaret Attipoe is with the CSIR.

And look at her rather pathetic behaviour here: