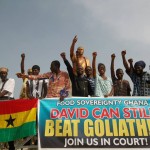 Food Sovereignty Ghana (FSG), a grass-roots movement of Ghanaians, home and abroad, dedicated to the promotion of food sovereignty in Ghana, celebrated its 2nd anniversary on Saturday 21st March 2015.

The occasion was marked with a pilgrimage to the Kwame Nkrumah Mausoleum, where members renewed their vows to make sure that “Ghana, our beloved country, is free forever!” FSG firmly believes that the imposition of GMOs on Ghanaians is the greatest threat to our independence and sovereignty as a people.

FSG is proud of its achievements within such a short space of time, considering the limited resources, and hostile attacks orchestrated by the usual suspects. We take particular pride in the fact that, two years ago, it was difficult to talk about Genetically Modified Organisms (GMOs), as few people knew what it was. Today, it is a house-hold word as a result of much stakeholder engagement collectively undertaken by our members and supporter groupings.

Our movement is thus particularly pleased with the overwhelming support we are currently enjoying throughout the length and breadth of the country. We are grateful to Ghanaians from all walks of life, irrespective of ethnicity, religious background, party political affiliation, and gender, who have joined hands with us in this struggle to defend the rights of future generations.

We deeply regret, however, that the level of support we are enjoying at the grass-roots is not being translated into any serious attention by the ruling National Democratic Congress (NDC). Our call for an indefinite Moratorium or ban on the Propagation, Cultivation, Raising, and Growing of Genetically Modified Organisms in Ghana, continues to fall on deaf ears. We call on NDC cadres who place loyalty to their own health above that of loyalty to party, to join us in these demands and help put pressure on government. They are the people most likely to be listened to.

This struggle is ultimately a political one. The arena of struggle is beyond the reach of FSG, as this happens within the various political parties. We therefore call on all Ghanaians to make the imposition of GMOs on us, a high priority item in their internal political discourses. We are not happy that, with the exception of the Convention People’s Party (CPP), which has come out clearly in opposition to the UPOV-compliant Plant Breeders’ Bill, and the imposition of GMOs on Ghanaians, the leadership of other political parties in Ghana remain profoundly silent.

We are however pleased that the leadership of Ghana’s faith-based organisations, Muslim, Protestant, Catholic as well as traditional African faith, are all solidly upholding the “Precautionary Principle” and putting the health and the environment of Ghanaians first, before the profits of the foreign corporations lobbying to take over our seed markets and replace our natural seeds with genetically modified ones. We salute all of them and will continue to work with them across this nation to ensure that a logical conclusion to the GMO threat is reached.

There is growing concern internationally concerning the unknown long term effects of GMOs on human health and the environment and this is reflected in recent bans and precautionary measures taken by responsible governments all across the world to limit the dangers posed to their populations. FSG continues to be inspired by responsible leadership across the world that seeks to tread cautiously with the GMO agenda. In the words of the UN Special Rapporteur on the Right to Food, Hilal Elver “I am against GMO’s for several reasons…We don’t know the health impacts of GMO in the long term”.

Finally, we wish to use this occasion, to invite all and sundry, to join us at the Human Rights Division of the Accra High Court on Thursday, 2nd April, 2015, as we continue to seek in a lawful manner to bring about out an indefinite injunction on the commercial release of Bt. cowpeas and GM rice, scheduled for the Ghanaian market, as early as this year!