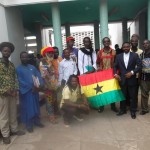 Picture shows some of our members supporters, friends and Lawyer Wayo Tetteh at the High Court Accra.

Today saw the beginning of what will likely be a landmark case regarding the future of genetically modified organisms, GMOS, in Ghana. The case filed by Food Sovereignty Ghana, FSG against the National Biosafety Committee, NBC, as the first defendant, and the Ministry of Food And Agriculture, MoFA, was called at the Human Right Division of the Fast Track High Court today, at 9.30am.

FSG was represented in court by Mr. George Tetteh Wayo, whilst the Attorney-General represented the defendants. The case was adjourned to the 3rd of March, to enable the defendants to put in their statement of case.

There was a little drama in court when the lawyer of the defendants tried to argue that because the Attorney-General had not been sued, hence they had not put in any defence. The judge then made it clear to them that it is the duty of the Attorney-General to to defend public institutions, so they have been hinted to file all necessary processes.

The judge also made it clear that there shall be less oral submissions. Both the 1st and 2nd defendants, as well as the FSG are supposed to file statements of case as well as supplementary statement of case, before the 3rd of March.