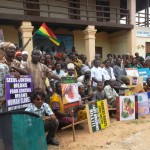 The town of Kpando located in the middle of the Volta region was the scene of a historic occasion.  At a durbar called by the Chiefs and people of Akpini State, members of Food Sovereignty Ghana (FSG) engaged a large audience gathered at the Palace of the Paramount Chief Togbe Dagadu VIII on the benefits of organic farming and the dangers associated with genetically modified organisms.

The engagement at the palace was the peak of a two day visit to the area by members of FSG.  In collaboration with the Rastafarai Council, two free film shows were held on consecutive evenings to educate and engage the communities on the dangers and negative implications of genetically modified organism (GMOs) on human health and the environment.

On Thursday July 23 a clean-up exercise was held in the community in collaboration with the Municipal Authority.  Speaking at the gathering the Municipal Chief Executive, Mrs. Delali Paulina Adinyirah thanked the Rastafarai Council for their proven record of supporting community development projects and exercises.  She commended FSG for engaging the community and sharing the important information which she said could help Ghanaians make informed decisions on GMOs. 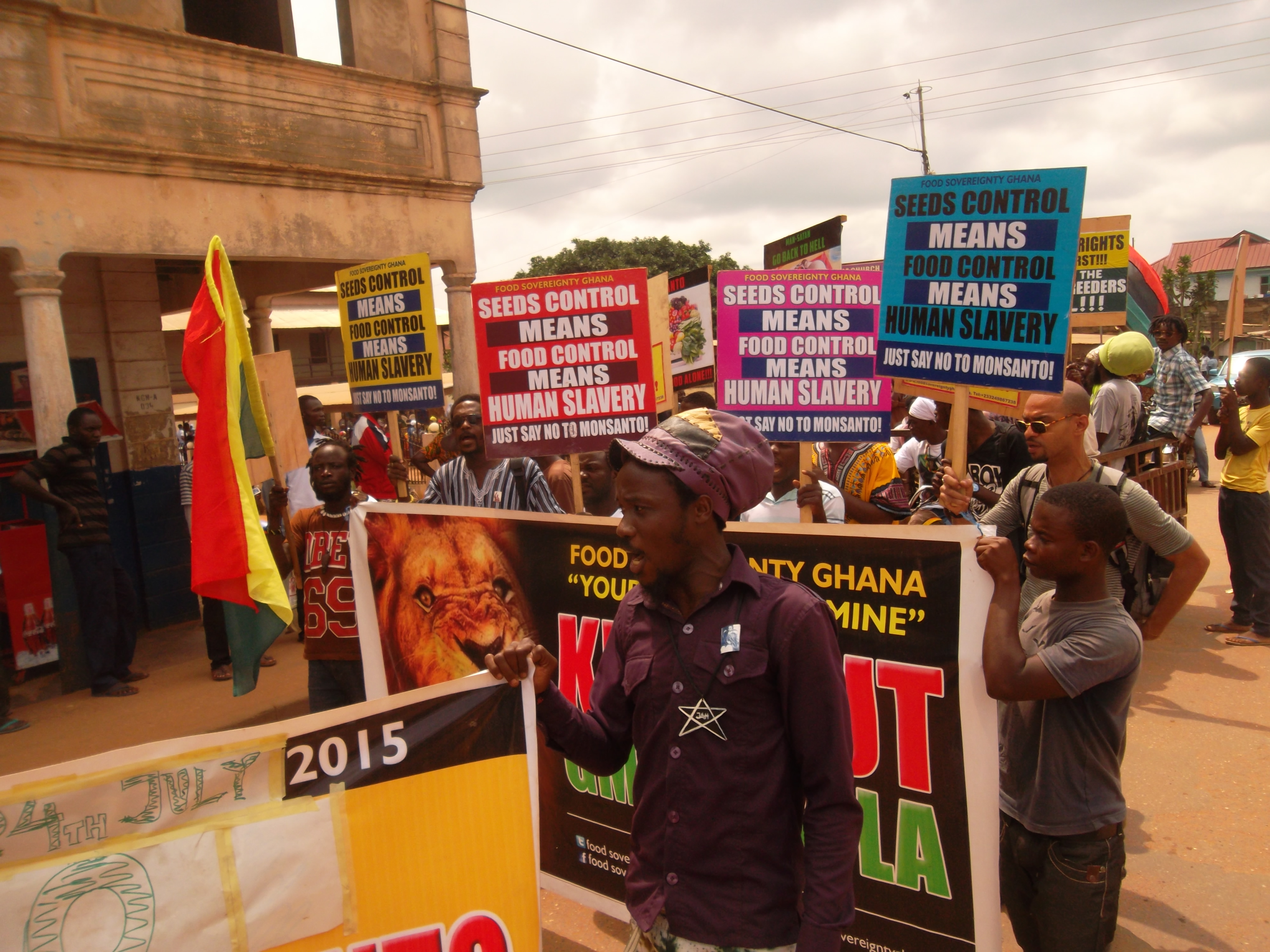 On Friday July 24th, there was a peaceful march which started from the stadium and proceeded through the principal streets of Kpando ending up at the palace.

In an appeal to the Paramount Chief Togbe Dagadu VIII, the secretary of FSG Elvis Kofi Adjei urged the people of the Akpini State to grow and eat organic food.  He requested a parcel of land on which the organization could support the community to set up a model organic farm. He also drew the attention of the gathering to the clandestine nature in which the government was dealing with the issue of the attempts to impose GMOs into our food chain.

He  cited the recently concluded meeting in Arusha Tanzania of the Africa Regional Intellectual Property Organization (ARIPO) as an example of a deliberate agenda to quietly change the seed laws in this country to the benefit of foreign companies and organizations without any consultation of the people of Ghana. 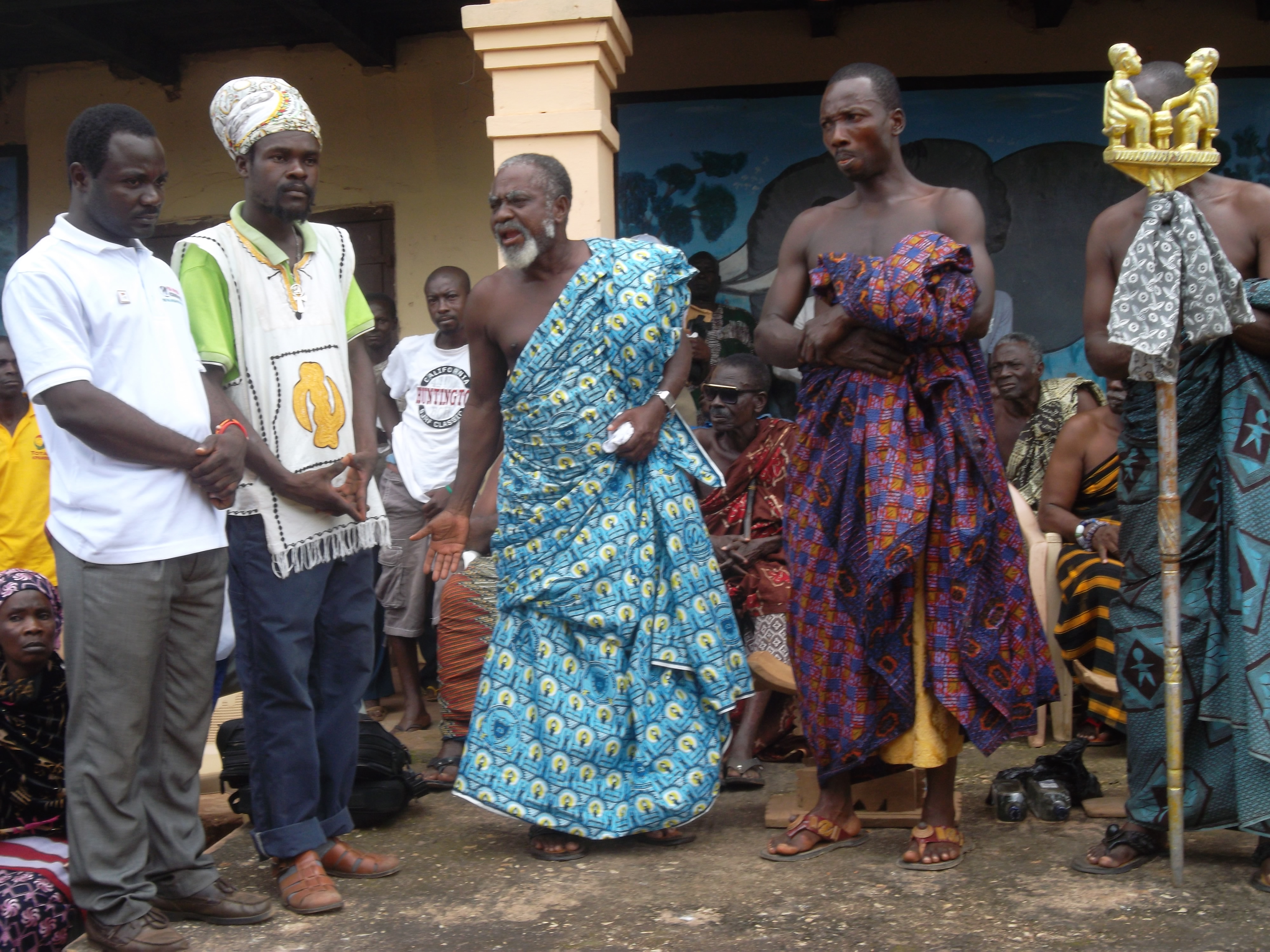 He warned that the recently signed ArushaPlant Variety Protocol if passed by Parliament would prevent farmers from saving and replanting seeds, eventually being forced to buy new seed each season from the seed industry monopoly that can set any price it wants.

In his statement through his linguist, the Chief urged the community to take up organic farming more seriously as this was the only way the integrity of the environment could be protected and sustained. The request for land was duly granted and the linguist reiterated the wish of the Chiefs and people of the Akpini State to grow what they eat and eat what they grow for optimum health.  He attributed a lot of the diseases that are afflicting many individuals all over the nation to the change in diet from more nutritious traditional meals to western inspired dishes.

Communications Director of FSG, Mr. Edwin Kweku Andoh Baffour thanked the Paramount Chief for his hospitality throughout the two day visit. He said FSG was inspired by the high moral position maintained by Togbe Dagadu VIII in line with the oaths he had sworn to protect the traditional culture, land and practices of their forebears and pledged the commitment of the organization to work with the community in protecting their agricultural systems and the environment.