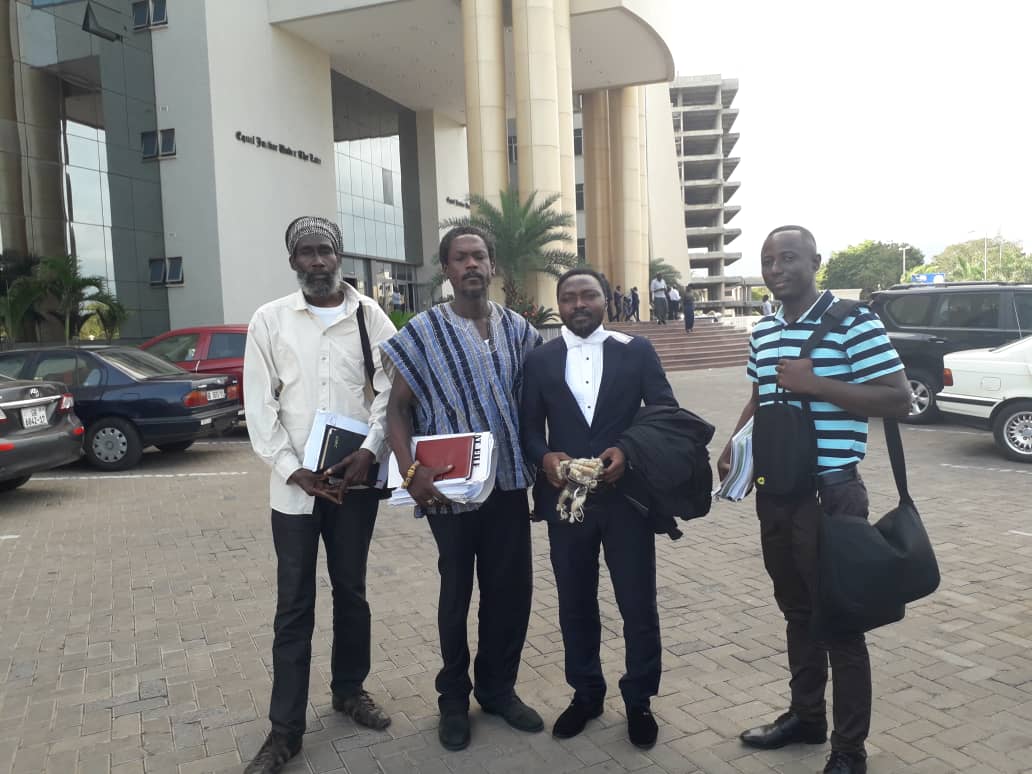 From Left to Right: Messrs Raswad Nkrabea, Edwin Bafour Andoh, of FSG with our lawyer, Mr. George Tetteh Wayoe, and Mr. Solomon Prana from the Vegetarian Association of Ghana.

Food Sovereignty Ghana (FSG) appeared before the Human Rights Court in Accra on Wednesday October 31st 2018, for the continuation of the case, Food Sovereignty Ghana & 3 ors Vs National Biosafety Committee & 4 ors, against the commercialisation of genetically modified crops (GM crops) in Ghana.

In the process of application for directions to finally set issues for trial, the defendants raised issues dealing with the jurisdiction of the High Court to deliberate on the matter. They cited Section 26 of the Biosafety Act 831 which establishes a tribunal for resolving issues relating to bio-engineering and technology. The court consequently ordered the counsels for the plaintiffs to make written submissions in relation to their positions on the issue of jurisdiction.

The hearing was thus adjourned to November 16th at 11 am.

This is not the first time that the case has encountered such a hurdle. On Monday March 19, 2018, the counsel for the fifth defendants, Ghana National Association of Farmers & Fisherfolk (GNAFF), informed the court of a motion of stay of proceedings filed in the High Court. Their lawyers claimed that the ruling that dismissed the injunction in 2015 had determined the matter. Their appeal was dismissed on March 28th by the Court of Appeal.

The Accra Human Rights High Court had earlier on March 3, 2015, placed an injunction on the commercialisation of GMOs (genetically modified organisms) in Ghana, pending the adjudication of the case, but this was dismissed on Thursday, 29th October, 2015, when the court, presided over by Justice Dennis Adjei, ruled in favour of the defendants, and lifted the interlocutory injunction.

However, even in the ruling against FSG, there is a grain of victory! The Judge stated in his ruling that: “The law is that, GMOs should be differentiated from organic or natural cause, and should be labelled to enable consumers know the products to take an informed decision”.

So FSG, in addition to the hot pursuit of the purveyors of GMOs in our courts, is also embarking on a national campaign for the mandatory labelling of GMOs in Ghana, “to enable consumers”, as the judge puts it, “know the products to take an informed decision”. We invite all Ghanaians who care about the food their eat, to kindly join us in this campaign.

The global debate on the issue of GMOs makes this a historic and landmark case concerning biotechnology in Ghana and the final determination will have long lasting impact on national policy regarding the introduction of GMOs into our food chain. We shall overcome!
–
For Life, the Environment, and Social Justice!