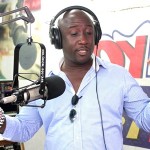 On the 20th of February 2014, Ghana once more heard the verdict of a journalist who has been interviewing FSG, Prof. Walter S. Alhassan, politicians, and all manner of people from both sides of the debate.

In his weekly show, “That’s My Opinion”, he came out clearly against the Plant Breeder’s Bill, and GMOs in general.

This is not the first time a journalist is taking a position after listening to both sides of the debate. A similar event occurred after a Media Event organised by the Graphic Corporation in which FSG was represented by our able Lawyer, Mr. John Opoku. The pro-GM team was led by Professor Walter Sandow Alhassan himself.

Also, just like Nana Ansah Kwaw, all the 20 journalists, after listening to the two sides of the argument, unanimously resolved to petition Parliament not to pass the Plant Breeder’s Bill in its present form. They did. And it contributed to the decision by Parliament to refer the matter to the “Leadership of the House.

It is great to listen to the force of Nana Ansah Kwaw’s argument. It’s brilliance and at the same time, simplicity. We shall endeavour to bring the audio out soon!

Ghana News – GMO debate: why do we want to fly while we are still crawling? – That’s my opinion @ 2pm http://www.myjoyonline.com/news/2014/February-20th/gmo-debate-why-do-we-want-to-fly-while-we-are-still-crawling-thats-my-opinion-2pm.php