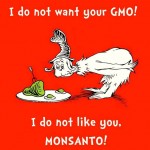 Food Sovereignty Ghana wishes to alert the public concerning the unrelenting attempts to impose GMOs on Ghanaians. The Plant Breeders Bill (PBB) has suffered a setback in Parliament, due mostly to the robust workings of Ghanaian democracy. A majority of the Ghanaian people are against the bill and have made their well-informed opinions known. However, powerful foreign governments, multinational corporations and foundations, Big Agribusiness, still want the bill passed. They have not stopped their efforts to force the PBB through Parliament and force their GMO seeds onto Ghanaians. They have too much money at stake.  Europe and even the United States are turning against GMOs.  Forcing GMOs  on Ghana and all of Africa is necessary for their financial survival, not for our survival.

Predictably, their next step will be a series of supposedly “educational” initiatives. They did the same thing last year, as soon as the PBB was confronted with numerous petitions and had to be withdrawn for further consultations. We therefore know from experience that the pro PBB/GMO forces will again sponsor forums in which they will extol the alleged virtues of seemingly miraculous GMO crops. They will call anti-GMO activists ignorant and anti-science. They will invoke Science as if science were a god and allege Science tells us we must have GMOs or die.  They will ignore or belittle the reasons we oppose GMOs.

The latest effort to fool Ghanaians about the Plant Breeders’ Bill and GMOs is a half day symposium offered on Wednesday, 10thDecember, 2014 at CLOSSAG Conference Room (Ministries) in Accra at 9:30am. This symposium is organized by the CSIR-Science and Technology Policy Research Institute (STEPRI), under the Development Research Uptake in Sub-Saharan Africa (DRUSSA).

DRUSSA is interesting. It is particularly active in Ghana and Uganda, both countries are major targets of the G8NA in the push to get GMOs into African countries. DRUSSA’s description of itself uses lots of fancy Big English to say they work closely with universities and academics in the target countries, and that they work with politicians, bringing academics and politicians together, using academics to try and influence public policy and legislation.

If you read about DRUSSA on their website, they tell us they get their funding from DFID. The UK’s Department for International Development (DFID) claims on its website that it “leads the UK’s work to end extreme poverty.” However, if you dig more deeply, you’ll find “that hundreds of millions of pounds of British taxpayers’ money is being used to promote projects designed to benefit some of the world’s richest agribusiness corporations and to extend their control over the global food system. DFID is at the centre of an intricate nexus of corporations and donor-sponsored institutions seeking to maximise private profit from agriculture. Personal connections play a vital role, and there is a significant ‘revolving door’ of staff between DFID and agribusiness corporations, with the personal links going beyond DFID to the heart of the UK government and its economic policy. In addition, this report reveals DFID’s involvement in a network of private enterprises and investment fund managers incorporated in the secrecy jurisdiction of Mauritius. (http://markcurtis.wordpress.com/2012/12/30/the-hunger-games-how-dfid-support-for-agribusiness-is-fuelling-poverty-in-africa/)

In Ethiopia DFID is working tirelessly to increase extreme poverty.  DFID money is supporting the forced removal of people from their homes and farms and forced relocation to “villages” that have no resources and where they have no way to feed themselves. These forcible evictions are accomplished with assaults, beatings, rapes, and a variety of human rights abuses. The farmers’ land is appropriated for growing monoculture crops dependent on destructive chemical inputs and designed for export. Keep in mind this policy is happening in Ethiopia, a country that has suffered terrible famine in recent memory. (www.theguardian.com/global-development/2014/jul/15/ethiopian-farmer-uk-court-resettlement-policy-villagisation)

These are the real backers of the DRUSSA symposium, the Agribusiness interests behind DFID and a variety of other institutions. Their goal is not to end poverty but to make themselves richer at the expense of the poor and at the expense of all Ghanaians.

There is no reliable science that supports GMO safety or long term productivity. And there is an ever-increasing body of research that points to enormous dangers and destruction to our health and our environment from GMO crops and related chemicals.

“Accepting or Not Accepting GMOs: Implications for Sustainable Food Production in Ghana” is the DRUSSA symposium title.  Keep in mind there is no evidence that GMOs can make any contribution to a sustainable food supply.  There are lots of industry claims, but no evidence.  Where GMOs are more productive, that effect only lasts 3-5 years.  Then the toll exacted by the toxic chemical pesticides and fertilizers begins to reveal its devastation on the land and the crops.  To date, all serious studies tell us the only way to sustainable agriculture is with small family farms, a rich diversity of seeds, and inputs that do not poison the land, the air, the water, and all the people, plants, and animals that live there.

Previous fora and symposia sponsored by supporters of the Plant Breeder’ Bill (PBB) and GMOs have excluded or minimized any alternate viewpoints.   Farmers have been promised a voice and excluded at the last moment, as has FSG.  It will be interesting to see how the DRUSSA symposium handles alternative viewpoints, whether they are treated with equal respect and accommodation.