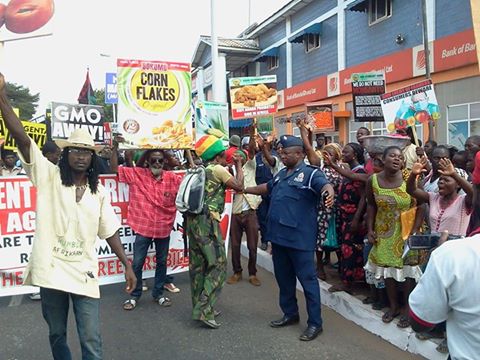 This year’s international March Against Monsanto falls on Saturday, 19th May, 2018.

This year’s international March Against Monsanto falls on Saturday, 19th May, 2018.

Food Sovereignty Ghana and March Against Monsanto – Accra, have the pleasure to invite you to a march through some of the principal streets of Accra to highlight our desire for public awareness and participation in decisions regarding biotechnology in agriculture.

We strongly believe that such decisions must not be left in the hands of multi-national corporations and their local enablers using their GMOs, pesticides, herbicides, and seed monopoly lobby to influence the outcome of government policy.

March Against Monsanto, is an international grassroots movement against Monsanto Corporation, in protest at the company’s practices of using their affluence to influence the outcome of legislation, regulations, research findings, media narratives, etc. The movement was founded by Tami Canal in response to the failure of California’s Proposition 37, a ballot initiative which would have required labelling of food products made from GMOs. Monsanto was reported to have poured in $7,100,500 to help narrowly defeat California’s *Proposition 37.

Since our formation in 2013, FSG has marked the day without fail. The primary purpose of the march is to draw attention to our demands of the day. This year’s march comes at a time where we are yet to see the mandatory labelling of GM foods, even though a court ruling clearly told us that, “The law is that GMOs should be differentiated from organic or natural cause, and should be labelled to enable consumers know the products to take an informed decision.”

We still seem to live in a situation where our courts say there is a law, but that law appears nowhere to be found!

We are marching because even after overwhelmingly exposing the UPOV-compliant Plant Breeders’ Bill, (PBB), as too rigid, unsuitable, and illegitimate, there are still forces ignoring our call for a “sui generis’ plant protection system as required by the World Trade Organisation (WTO) to protect the intellectual property of plant breeders. These unpatriotic forces are still calling for the passage of the ill-structured Plant Breeders’ Bill without any changes!

As we prepare to march, FSG wishes to take the opportunity to salute Richard Mosiah Ababa Allen, a great comrade who embarked on a nationwide walk in January 2018. So far he has covered seven out of the ten regions in Ghana. Starting out in the Volta region he proceeded north toward Kete Krachi entering the Northern Region and continuing onto Upper East and then Upper

West. In April, he toured Brong Ahafo and he is currently in the Ashanti region. He is expected to arrive in Accra by the end of June. Richard, a free-lance researcher on Human Behaviour continues to engage a wide spectrum of Ghanaian citizens, in championing and advocating for unity and progress for our nation, through this Educational Awareness Walk dubbed the Visitation Walk. The sole intention is to walk through the whole of Ghana to raise a high awareness on important agricultural issues which have not received much attention on the national agenda. In this effort he has collaborated with Food Sovereignty Ghana (FSG) who have been at the forefront of defending Ghana and her food and agricultural systems against the introduction of Genetically Modified Organisms (GMO).

We are also marching to celebrate the victories we have chalked in our advocacy in the course of the year. The most notable being the systematic defeat of the pro-GMO lobby in all debate encounters with them.

We are marching because the passionate support from an overwhelming number of Ghanaians from various backgrounds tells us that history is on our side, and agroecology, not biotechnology, is the way forward!

Please, join us on Saturday May 19th to March Against Monsanto and Bayer, as we call for sustainable policy-making in our Agriculture!