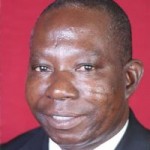 Mr Alfred Agbesi, Deputy Majority Leader in Parliament appears confused about the nature and contents of the Plant Breeders Bill. He appears either not to have read the Bill, not to have understood it if he read it, or simply be lying (deliberately misleading) his constituents as to the nature of the Bill, when he told them, “the Plant Breeders Bill before Parliament is not intended to introduce Genetically Modified Organisms (GMO) food into the country”.

Mr Agbesi, who is also the Member of Parliament for Ashaiman, said this during the Ashaiman Municipal Assembly’s First Ordinary Meeting of the Fourth Session of the Second Assembly.” on Monday, 19th May, 2014. He went as far as to say that “This bill seeks to regulate the production, offer for sale, sale marketing and advertisement of new varieties. The bill is therefore not introducing GMO as some section of the public would want us to believe.”

Perhaps, Mr. Agbesi saw “genetic engineering” but he was looking for the word “GMO”! The law is clearly saying the plant breeder’s right to market his GMOs in Ghana is above the laws of Ghana, and here we hear an MP saying that the law has nothing to do with GMOs!

“A plant breeder right shall be independent of any measure taken by the Republic to regulate within Ghana the production, certification and marketing of material of a variety or the importation or exportation of the material.”

The Bill seeks to pre-emptively knock out of order, any attempt by the government to control “the production, certification and marketing of material of a variety or the importation or exportation of the material.” And the “material of a variety” in question is described in Clause 20 (6) of the Bill as follows:

Clause 20 (6):
“(6) An essentially derived variety may be obtained for example by the selection of a
(a) natural mutant or induced mutant,
(b) somaclonal variant, or
(c) variant individual from a plant of the initial variety, back crossing or transformation by genetic engineering.”

A variety obtained by transformation through genetic engineering is a GMO.

Regardless of Mr. Agbesi’s personal intentions, protecting GMOs is one of the specific intentions of the G8 New Alliance and USAID who are coaching Ghana’s parliamentarians on the language and passage of the Bill. Their intentions are spelled out in their document The G8 Cooperation to Support the “New Alliance for Food Security and Nutrition In Ghana”.

The Bill also allows foreign plant breeders to take the seeds and germ plasm developed by Ghana’s farmers over centuries, modify it in their laboratories, patent it as their own, and sell it back to Ghana’s farmers. At the same time the Bill prevents farmers from freely saving, using, sharing, or selling the seeds they have developed. They will be forced to buy their own seeds from foreign corporate plant breeders. This may not be Mr. Agbesi’s intention, but it is what the language of the Bill permits and requires. His personal intentions are not relevant.

Mr. Agbesi is ignoring the other grave danger of the Bill. It is a ticking time bomb that can explode and destroy the entire budget of the Country and Government of Ghana at any time. Clause 23 gives the foreign plant breeding corporations, the giant agribusiness transnationals, sovereign rights above the laws of Ghana. If Ghana passes laws to protect Ghanaian farmers and citizens from the transnational corporate greed and environmentally destructive practices, Ghana could be assessed judgement debts in the millions or even billions of dollars.

Even a seemingly harmless law that did not appear relevant could be contested by the MNCs, multi national corporations, and huge judgement debts issued against Ghana. These would have to be paid by taxpayers through the nation’s budget, leaving Ghana unable to provide basic services that are the duty and purpose of government.

It is this kind of corporate sovereignty above the laws of nations that is causing many countries, those countries that care about the welfare of their citizens, to turn away from current trade agreements, such as UPOV law on which the Plant Breeders Bill is based.

Mr. Agbesi needs to read the Bill more carefully. He needs to carefully consider the actual meaning of the language of the Bill. And he needs to be more honest with his constituents. It is too late in the day for Mr. Agbesi to feign ignorance. He must have been corrupted or he is simply incompetent. Either way, he is not worth the tax payers’ money. Such gross dereliction of duty raises all kinds of doubts. And it can spread like a contagion, as it casts a slur on his fellow MPs who put such an irresponsible individual there as Deputy Majority Leader in the first place!