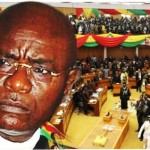 Food Sovereignty Ghana calls on the Speaker to order publication of a report on the “consultations” that the Select-Committee on Constitutional, Legal, and Parliamentary Affairs undertook, following his request for “further consultations” with stake-holders on the Plant Breeders’ Bill when it came before the House on 11th November, 2014.

This call follows rather strange revelations by the Vice-Chairman of the Parliamentary Select-Committee on Constitutional, Legal, and Parliamentary Affairs, Hon. George Loh, MP for North Dayi Constituency, in an interview with Radio Host, Kweku Vander-Pallen on XYZ 93.1fm in the morning of Wednesday, 16th March 2016 in which he said:

“We have done extensive consultations. We even did two consultations carried live on television with all stake-holders. So, nobody can pretend that we haven’t spoken to people… If after consultations, you do stand where you are, fine! We have consulted”!

According to Hon. George Loh, the “consultations” that we have been expecting from Parliament since 11th November 2014, have already taken place without our knowledge! He even claimed in the interview that a meeting with FSG, prior to the Speaker’s call, on 4th December, 2013, was part of the “further consultations” called for by the Speaker on 11th November, 2014, almost a year later.

We are not claiming that we are the only group that petitioned Parliament that needed to be consulted. However, we see that almost all the groups that petitioned Parliament are still waiting to be ‘consulted. We wonder which groups actually were consulted? Why were most or all of the petitioners excluded? What was the basis of the  petitions of any groups that may have been consulted, and on what grounds were they rejected by the Committee?

On Tuesday, November 11, 2014, the last time the Bill came up on the floor of the House at the Consideration Stage, the Speaker ruled: “I would urge for further consultation”, he said to Hon. Alban Bagbin, Majority Leader and then Chairman of the Constitutional, Legal, and Parliamentary Affairs Committee. This call for “further consultation” was key to the unprecedented suspension of a Bill that was already at the Consideration Stage. The reason the Speaker gave for this unprecedented move was:  “This is because it is important to inform the people of Ghana”. http://www.parliament.gh/publications/30/906)

It therefore behooves the Committee to produce an official report detailing the “consultations” they claim to have done for all to know why Parliament still refuses to heed the demands of Ghanaian civil society groups and Faith-based organisations which who have formally petitioned them. The minimum courtesy one expects is at least a report detailing why their objections were not taken into consideration.

We particularly demand responses to these fundamental objections to the Plant Breeders’ Bill. All of these objections apply equally to the ARIPO Arusha PVP Protocol, a treaty version of the exact same bill.

1. Ghana can protect plant breeder rights without necessarily opting for UPOV 91. The Bill is modelled on the International Convention for the Protection of New Varieties of Plants of 1991 (UPOV 1991) which is a rigid and an inflexible regime for plant variety protection (PVP). It is worth noting that today out of the 71 UPOV members, only a fraction – about 22 developing countries are members of UPOV. Most of these developing countries (e.g. Brazil, China, Argentina, South Africa) and even some developed countries (e.g. Norway) are not members of UPOV 1991 but rather UPOV 1978, which is a far more flexible regime.

Ghana has full flexibility under the World Trade Organization (WTO) to develop an effective “sui generis” system for plant variety protection, i.e. to develop a unique system that suits its needs. In view of this, it is truly unfortunate and even irrational that instead of designing a PVP regime that reflects the agricultural framework and realities of Ghana as some other countries have done (e.g. India, Thailand, Ethiopia), Ghana is choosing to adopt and be bound by UPOV 1991 without any concrete evidence or impact assessment of the necessity and impacts of adopting such a regime.

Ghana is a member of the World Trade Organization and the rights and obligations concerning intellectual property are governed by the WTO Agreement on Trade Related Aspects of Intellectual Property Rights (TRIPS Agreement). According to Article 27.3(b) of the TRIPS Agreement, Ghana has to provide protection of plant varieties by an “effective sui generis” system. Sui generis means “unique” system of protection. This provision allows Ghana maximum flexibility in the design of plant variety protection (PVP). This is what many developing countries such as Thailand, Malaysia, India have done. The African Union Ministers have also recommended a unique Model Law for Plant Variety Protection. See: Ghana’s Plant Breeders Bill Lacks Legitimacy! It Must Be Revised! | http://foodsovereigntyghana.org/ghanas-plant-breeders-bill-lacks-legitimacy-it-must-be-revised/

The public has a right to know why our Parliament is insisting on the UPOV-91 model for Ghana!

2. As a member of the International Treaty on Plant Genetic Resources (ITPGRFA) we expect Ghana to take steps to realise farmers’ rights to use, sell, save and exchange farm-saved seeds, to protect their traditional knowledge and to allow their participation in national decision-making.

It is thus extremely disappointing to see that the Bill is heavily tilted in favour of commercial breeders and undermines farmers’ rights. The Bill does not allow farmers to sell and exchange seeds. A farmer’s use of farm-saved seeds on his own holdings is limited to “personal use” and regulation by the Minister and may be subject to payment of royalties.

3. The Bill also contains a “presumption” whereby a plant breeder is considered to be entitled to intellectual property protection in the absence of proof to the contrary. Usually the onus is on the applicant to prove that he or she has complied with the necessary requirements and is thus entitled to protection. But in this case there is a presumption in favour of the plant breeder. This “presumption” provision and the lack of an explicit provision that calls for the disclosure of origin of the genetic material used in the development of the variety including information of any contribution made by any Ghanaian farmer or community in the development of the variety creates opportunities for breeders to misappropriate Ghana’s genetic resources using the PVP system and to exploit smallholder farmers.  Ghana’s farmers must not be criminalized by Ghana’s laws for practising traditional farming.

4. The Bill also lacks provisions that will ensure that intellectual property protection will not be granted to varieties that adversely affect public interests.

“23 Measures regulating commerce.
A plant breeder right shall be independent of any measure taken by the Republic to regulate within Ghana the production, certification and marketing of material of a variety or the importation or exportation of the material.”

FSG’s position on this is that it is important for the Bill to be coherent with Ghana’s sovereignty plus other legislation and national interests such as the protection of the environment, health, prevention of misappropriation of genetic resources etc.

The inclusion of Clause 23 hinders the ability to achieve such coherence as it views the grant of PBR as being independent from all other regulations. In certain cases it may be important to refuse to grant PBR over a variety, particularly where national interests are at stake. Such situations include not granting PBR on varieties that are injurious to public health, environment etc or where the application does not disclose the origin of the genetic material.

6. Any PVP law in  Ghana must protect Ghana from biopiracy.  We recommend language such that: any entity or individual who provides germplasm resources to any foreign entity, organisation or individual in cooperation to conduct research, shall make an application and submit a national benefit-sharing plan.

Why do our elected representatives ignore these points, at least according to the Hon George Loh.  Why do our MPs reject these suggestions that would truly protect Ghana’s agriculture and make our lives more sustainable and our agriculture more profitable for all Ghanaians.