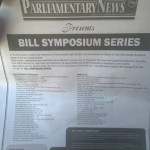 Food Sovereignty Ghana calls on Parliament to completely withdraw the UPOV-compliant Plant Breeders’ Bill and replace it with a “sui generis” plant variety protection (PVP) system suitable to our conditions. This call has become necessary in the light of the announcement by Parliament to provide “organisations and the general public the unique opportunity to have their say in the passage of any law through the BILL SYMPOSIUM SERIES” [1].

First of all, we would like to reiterate our call for the publication of a report on the consultations so far undertaken by Parliament since the Plant Breeders’ Bill appeared before Parliament in June, 2013. [2] We note that it is almost three years now since these consultations begun. We are also aware that a lot of petitions have been presented to Parliament. It does no one any good to ignore all these and organize a one-day symposium to replace such valuable and detailed work already presented to Parliament over the years.

We find the inclusion of the Plant Breeders’ Bill in these series a strange addition for the simple reason that just a few weeks ago the Vice-Chairman of the Parliamentary Select-Committee on Constitutional, Legal, and Parliamentary Affairs, Hon. George Loh, MP for North Dayi Constituency, claimed in  a radio interview with Host, Kweku Vander-Pallen on XYZ 93.1fm in on Wednesday, 16th March 2016 that:

These consultations have supposedly been going on since 11th November 2014. We therefore believe that these series must not be used as an excuse for not accounting for the time and energy of Ghanaians who have already petitioned Parliament. There is absolutely nothing new to say that has not been said before. We are finding it difficult to shake off the thought that this is a way of avoiding the publication of the report on the consultations so far done by Parliament.

Hon. George Loh confesses in the same interview mentioned above that, “The Plant Breeders’ Bill, I always say is the most misunderstood bill in our Parliament”. What prevents Parliament from publishing the report and clearing the air? Is the organisation of this symposium not also going to end up with a similar claim that “If after consultations, you do stand where you are, fine”? If not, we would like to know why Parliament still “stands at where they are” despite it being pointed out on several occasions that the Plant Breeders’ Bill (2013) is illegitimate and must be withdrawn?

“We have done extensive consultations. We even did two consultations carried live on television with all stake-holders. So, nobody can pretend that we haven’t spoken to people… If after consultations, you do stand where you are, fine! We have consulted… We have looked at the petitions. We’ve invited all the relevant people. We sat with Food Sovereignty Ghana, the Attorney-General, we’ve had all the consultations and all the meetings.” [3]

We take notice that this announcement of Monday, 15th April, 2016 on the BILL SYMPOSIUM SERIES follows closely our earlier call on March 29, 2016 for the publication of the report on the consultations of stake-holders ordered by the Speaker of Parliament. [4]

We strongly believe that it is about time that our Parliament shifts the discussion on the bogus UPOV-compliant Plant Breeders’ Bill to a focus on a “sui generis” PVP system for Ghana.

We have already pointed out that Ghana is a member of the World Trade Organization and the rights and obligations concerning intellectual property are governed by the WTO Agreement on Trade Related Aspects of Intellectual Property Rights (TRIPS Agreement). According to Article 27.3(b) of the TRIPS Agreement, Ghana has to provide protection of plant varieties by an “effective sui generis” system. Ghana has full flexibility under the World Trade Organization (WTO) to develop an effective “sui generis” system for plant variety protection, i.e. to develop a unique system that suits its needs. [5]

This provision allows Ghana maximum flexibility in the design of plant variety protection (PVP). This is what many developing countries such as Thailand, Malaysia, India have done. The African Union Ministers have also recommended a unique Model Law for Plant Variety Protection.

We are not saying that plant breeders must not be protected. What we want is a system of protection that guarantees the rights of the plant breeder as well as the farmer. So far, neither government nor Parliament has accounted for the basis for the opting for UPOV 91. In the Memorandum to the Bill, we are only informed about the decision without any justifications. [6]

Ghana can protect plant breeder rights without necessarily opting for UPOV 91. The Bill is modelled on the International Convention for the Protection of New Varieties of Plants of 1991 (UPOV 1991) which is a rigid and an inflexible regime for plant variety protection (PVP). It is worth noting that today out of the 71 UPOV members, only a fraction – about 22 developing countries are members of UPOV. Most of these developing countries (e.g. Brazil, China, Argentina, South Africa) and even some developed countries (e.g. Norway) are not members of UPOV 1991 but rather UPOV 1978, which is a far more flexible regime.

It is about time Ghana develops a unique system that suits its needs. That is what an effective “sui generis” system for plant variety protection is about. This is why the UPOV-compliant Plant Breeders Bill ought to be withdrawn completely. It is certainly not “sui generis”. Even the amendments proposed to the Bill, currently before Parliament were dictated to Ghana from Geneva. So far, not even one of the amendments proposed by the petitioners appears anywhere. Every single amendment proposed, currently before Parliament, comes from UPOV in Geneva. [7]

Compare with: Proposed Amendments to the PLANT BREEDERS BILL, 2013 which is supposed to be at the Consideration Stage in the Parliament of Ghana. It is scandalously word for word! [8]

None of the demands by Ghana’s civil society and faith-based organisations have been included. For there to be a meaningful symposium, it would be professional to publish first the report on all the consultations, together with the proposed changes as a result of these consultations, so the symposium could serve as our final comments on this report. Otherwise, this symposium appears to be yet another convenient excuse to avoid accounting for the consultations so far and hiding under a symposium to pursue the same agenda.

Our first demand is that as a member of the International Treaty on Plant Genetic Resources (ITPGRFA) we expect Ghana to take steps to realise farmers’ rights to use, sell, save and exchange farm-saved seeds, to protect their traditional knowledge and to allow their participation in national decision-making. Instead of rather than a Bill that is heavily tilted in favour of commercial breeders and which undermines farmers’ rights.

“Joining UPOV under UPOV 91 narrows the possibilities for states to adapt PVP law to individual country’s needs and to involve stakeholders effectively”.

Secondly, the Bill also contains a “presumption” whereby a plant breeder is considered to be entitled to intellectual property protection in the absence of proof to the contrary. Usually the onus is on the applicant to prove that he or she has complied with the necessary requirements and is thus entitled to protection. But in this case there is a presumption in favour of the plant breeder.

This “presumption” provision and the lack of an explicit provision that calls for the disclosure of origin of the genetic material used in the development of the variety including information of any contribution made by any Ghanaian farmer or community in the development of the variety creates opportunities for breeders to misappropriate Ghana’s genetic resources using the PVP system and to exploit smallholder farmers.  Ghana’s farmers must not be criminalized by Ghana’s laws for practising traditional farming.

As eloquently expressed by a study by the German Government on the UPOV Convention, Farmers’ Rights and Human Rights – An integrated assessment of potentially conflicting legal frameworks:

It calls for the harmonising of the goals and obligations from different treaties while implementing PVP law.

“Goals and obligations from different international treaties, such as TRIPS, ITPGRFA and ICESCR, need to be harmonised if a country sets out to develop a national PVP law. The TRIPS agreement as such leaves sufficient discretion to governments to design PVP laws in such a way that the obligations of other treaties are addressed”. [10]

Thirdly, the Bill also lacks provisions that will ensure that intellectual property protection will not be granted to varieties that adversely affect public interests. It also provides a long list of plant breeder rights without any responsibilities. We strongly recommend the inclusion of a “Strict liability” clause, such as: “All approvals for introduction of GMO or their products shall be subject to a condition that the applicant is strictly liable for any damage caused to any person or entity.”

Finally, we recommend that any PVP law in Ghana must protect Ghana from biopiracy.  We recommend language such that: any entity or individual who provides germplasm resources to any foreign entity, organisation or individual in cooperation to conduct research, shall make an application and submit a national benefit-sharing plan. [11]

We call on all those who have petitioned either for or against, to join us in demanding the publication of a report on the consultations done so far, and the conclusions of Parliament. A public account of these consultations would not only satisfy the order of the speaker who indicated, “This is because it is important to inform the people of Ghana”. but render transparent all controversies surrounding the Bill.

We welcome the initiative to organize a seminar on a “sui generis” plant variety protection system. We think our attention should more be focused on that and do our best to draw the attention of our Parliamentarians on the need for a “sui generis” PVP system rather than another symposium on the same Plant Breeders’ Bill. There is nothing new to say on this that we have not said before!

We also wish to take this opportunity to salute the farmers of Ghana, and the Peasant Farmers’ Association (PFAG) in particular, on the occasion International day of Peasant Struggle which is being celebrated by PFAG on 27th April 2016.

[10] The UPOV Convention, Farmers’ Rights and Human Rights – An integrated assessment of potentially conflicting legal frameworks” is online and can be downloaded on the GIZ webpage: http://www.giz.de/fachexpertise/downloads/giz2015-en-upov-convention.pdf:

[11] African Union MODEL LAW , ALGERIA, 2000 — Rights of Communities, Farmers, Breeders, and Access to Biological Resources: AFRICAN MODEL LEGISLATION FOR THE PROTECTION OF THE RIGHTS OF LOCAL COMMUNITIES, FARMERS AND BREEDERS, AND FOR THE REGULATION OF ACCESS TO BIOLOGICAL RESOURCES [PDF]