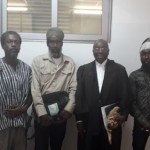 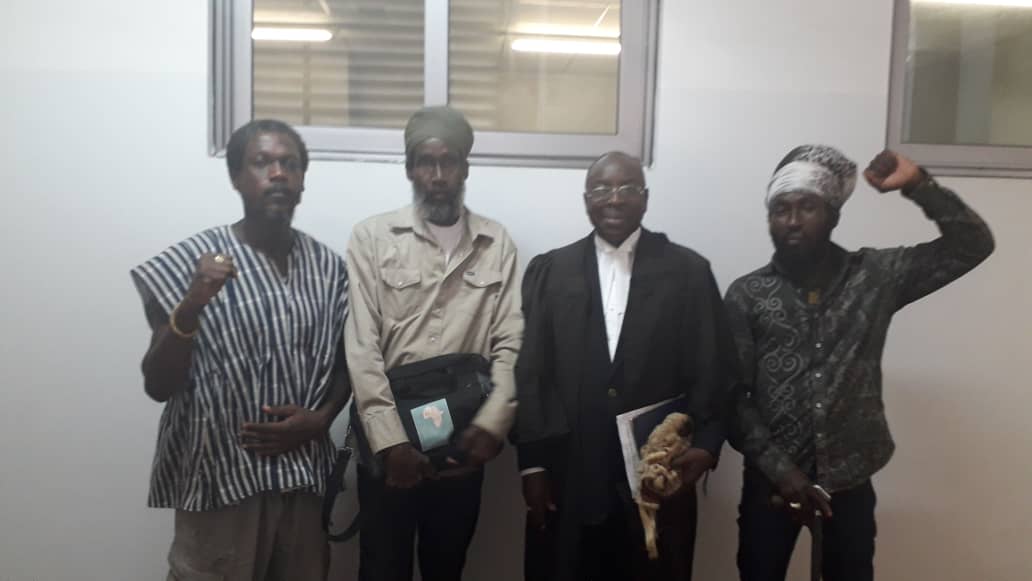 Lawyer Bright Akwetey, second from right, flanked by some of the Executive Members of FSG, (from left to right) Messrs. Edwin Baffour, Raswad Nkrabea, and Ras Zewu, at the foregrounds of the Accra Human Rights Court.

The Accra Human Rights Court has thrown out an objection challenging the jurisdiction of the court to try the case involving the authorisation of confined field trials of the first GM crops in Ghana, ruling in favour of FSG.

This is the second victory in a row. It would be recalled that the defendants, after failing to throw out the case in the Appeals Court on the grounds that the ruling on the interlocutory injunction against the intended realise of BT Cowpea and GM Rice until the final determination of the suit, arguing that the court ruling had determined the entire case.

This time, the defendants had raised issues dealing with the jurisdiction of the High Court to deliberate on case, Food Sovereignty Ghana & 3 ors Vs National Biosafety Committee & 4 ors, against the commercialisation of genetically modified crops (GM crops) in Ghana. They cited Section 26 of the Biosafety Act 831 which establishes a tribunal for resolving issues relating to bio-engineering and technology.

In her ruling the judge upheld the right of FSG to seek appropriate remedies from the Human Rights Court, insisting that the FSG suit is not pre-mature as the jurisdiction of the court has been properly invoked. More details shall be made available soon.

FSG shall hold a press conference at the Ghana International Press Centre at Ridge at 10 am on Saturday morning May 18.