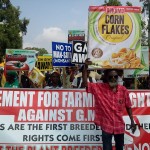 Food products such as soya and corn, imported from the USA, containing GMO ingredients are being sold to unsuspecting Ghanaian consumers without labels indicating contents. Far from warning the consumer with the appropriate caveat emptor, about the presence of GMOs some of these suspected GMO products on our markets even carry the label “all natural”! We hereby wish to bring this to the attention of the authorities to explain the rules governing the importation of GM foods into the country, and the rules concerning labels.

Over 90% of corn and soya in the USA is genetically modified, even though they are sold without any labels.“Natural” is one of the words these multinationals use to disguise their GM products. In fact the agribusiness industry is actually trying to write labelling legislation for the US Congress that uses the word natural to include GM. As of now natural has no legal definition in the US regarding food. So people and corporations can use it to mean anything they want, and do.

It was recently in the news a few weeks ago, that, Debbie Banafsheha, a California woman filed a putative consumer class action Monday, 17th March, 2014, against H.J. Heinz Co., alleging the company violated state and federal law when it falsely advertised its white vinegar as “all natural” even though the product derives from genetically modified corn.

There is another critical reason the agribusiness corporations do not want GMO labelling.  Consumers in every country reject GMO products.  Farmers reject GMO seeds.  Nobody wants GMO.  It is only by sneaking GMOs into the market without consumer knowledge that the corporations can be successful in pushing their unsafe products.

It is very important that GM foods are properly labelled, if they are to be allowed into the country. For instance, GM soya from the USA are imported into Europe strictly for animal feed. It is banned for human consumption. It therefore matters a lot if the same GM soya ends up on our shelves for human consumption! A simple walk through HP Ghana Ventures Ltd., will show you soya imported directly from the United States. Some of these include “Kirkland Signature Soymilk Vanilla”, “Vanilla Silk Soymilk”.

In addition to the soya, there are also suspicious corn products such as “Kirkland Signature Microwave Popcorn”,“Melville Corn Flakes”, “Kiggins Corn Flakes Toasted Corn Cereal”, and “Carlini All Natural Pure Corn Oil”. What makes this alarming is that all corn/maize products exported from the USA are almost certainly GM. It is close to impossible to find corn in the US that is not GM.  When farmers try to grow non-GM corn, their fields are contaminated by GM pollen.  The same is true of the soy as well.  GM plants are pesticide plants.  They are designed to contain pesticide in every cell, or to absorb massive doses of pesticides to all their cells.   They are pesticide cocktails being sold as food and beverages to unsuspecting consumers.

It will be impossible to provide an exhaustive list of all the products we suspect to be GMOs. Our point is to re-iterate our call for a moratorium on the importation of GM foods, or at the very least to uphold the consumers’ right to know what is in their food. This is a requirement of the Convention on Biological Diversity, CBD, which calls for public awareness and participation in the release of GMOs into the environment for impacts on health, the environment and SEC (socio-economic considerations). Ghana is a signatory.

After intensive and extensive deliberations, involving independent scientists from across the world, about what is required to regulate the safe release of GMOs into the environment, the CBD upheld the “Precautionary Principle”. The January 29, 2000 Cartagena Protocol on Biosafety says, in regard to controversies over GMOs: “Lack of scientific certainty due to insufficient relevant scientific information . . . shall not prevent the Party of import, in order to avoid or minimize such potential adverse effects, from taking a decision, as appropriate, with regard to the import of the living modified organism in question.”

Employment of the ‘Precautionary Principle’is a necessary safeguard to protect Ghana and Africa small-holder farming, her food security, health, sovereignty and environment from irreversible adverse impacts of GMOs. We want to eat food, not its “substantial equivalent” or genomes of organisms that have been transformed through laboratory techniques, including genetically engineered DNA (recombinant) and their direct introduction into cells! It is only proper to ask the authorities to make sure that those selling such dangerous products do so with a warning similar to what we see on cigarettes indicating, at least, that GMOs have the potential to cause unintended effects.

It should be common knowledge that “(t)he Biosafety Protocol makes clear that products from new technologies must be based on the precautionary principle and allow developing nations to balance public health against economic benefits. It will for example let countries ban imports of a genetically modified organism if they feel there is not enough scientific evidence the product is safe, and require exporters to label shipments containing genetically modified commodities such as corn or cotton.”

The very fact that this is happening at a time Ghanaians are weighing the arguments as to whether to eat or not to eat GM foods, makes this sinister attempt to clandestinely sell GM foods to Ghanaians most shocking indeed. We hold the view that this sinister attempt to surreptitiously replace our food, obtained from tens of thousands of centuries through traditional breeding and selection, with genetically engineered foods of unknown effects and consequences, and hiding this from the consumer ought to be a criminal offence. We hereby make an urgent call on our dear country’s regulatory authorities not to sleep on the job.

For Life, The Environment, and Social Justice!