Ghana is under a new colonial attack! 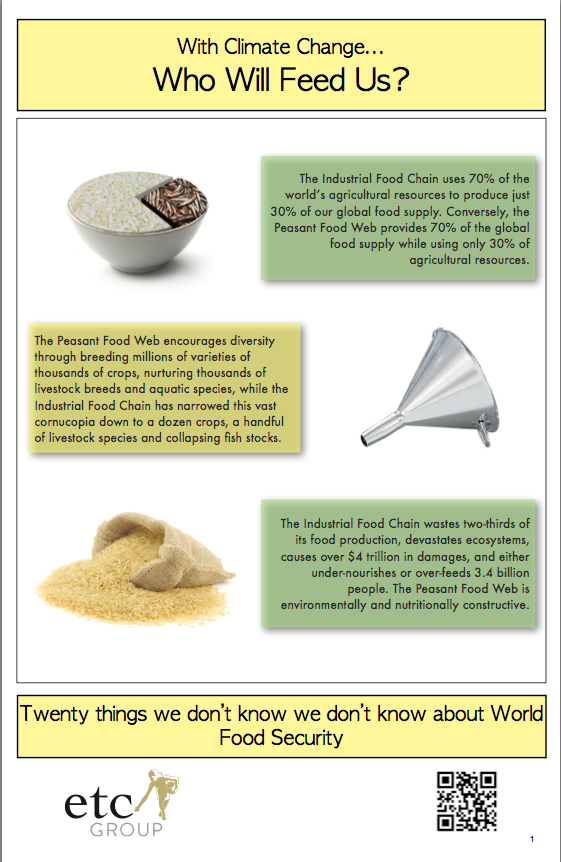 Ghana is under a new colonial attack!

On behalf of FSG, I offer a full salute to you all, especially to the organizers of this Conference.

We wish to thank you sincerely for extending this invitation to us.

Food Sovereignty Ghana is happy for this chance to share our perspectives on what is happening to our food. And it is our hope that this will help bring some focus on the need to do something about the great threat posed by GMOs, before it is too late. Time is what we don’t have.

The tools of this new colonialism are Genetically Modified Organisms. I am here to provide you with some information on exactly what GMOs are, and how control of Ghana’s and Africa’s agriculture, beginning with the entire seed supply is the objective. This is being accomplished around the globe by persuading countries to adopt new laws on intellectual property rights, and creating seed monopolies protected by patents.

Ghana and the continent of Africa, are the target of this new colonial resource grab by western corporate giants. Through the use of GMOs and seed patents, they seek to control our agriculture. Rich Duprey said it most succinctly at the Motley Fool investment site:

“While Africa has long been intransigent in its stance against introducing genetically modified crops, cracks are forming in the opposition, and the world’s leading biotechs — DuPont, Monsanto, and Syngenta among them –are poised to take advantage of the weakening stance and flood the market with seed, fertilizer, and pesticides. With Europe effectively closed off to GM crops, the seed and chemical giants are looking to Africa to be their next growth market.

To pave the way for choking off conventional seed stock and replace it with GM seeds, AGRA, led by Kofi Annan, issued a report last week saying opposition in Africa to GM crops is a “farce” based on a “fear of the unknown”.

If you are not familiar with how the agro-industial, GMO centric model of agricultural production has affected other countries, let me briefly clarify that here. The main trend is that agro-industrial agriculture ultimately drives the so-called “inefficient” small scale farmers off the land. Those rural people who are left, remain mostly as “contract labourers” serving the needs of agro-industrial corporations. They work as low paid labour, where they used to own their own farms. They and their families are often beset by health problems from constant exposure to the chemicals used by agribusiness that saturate the land the water and the air.

The displaced rural populations crowd together around the urban peripheries of new super-cities. The consequences of this compulsive urbanisation are marginalisation, social fragmentation, extreme insecurity, hunger, poor nutrition, rising levels of disease. All of this combines to create ever increasing social and political destabilization. Here in Ghana, can any reasonable person think that there are enough jobs around in Accra, Kumasi and Tamale for our rural youth? Is there room for a massive increase in the ranks of those engaged in “ka ya ye” in our cities?

What is a GMO?

GMOs in agriculture are products created when the DNA of organisms is altered using laboratory techniques, Genetic modification breaks down the natural barriers between species, to create new organisms from a mix of genes from different species that could not breed in nature. Genes from plants, animals, viruses, bacteria, fungi; any may be transferred from one to another. There are even experiments such as inserting spider genes into goats, hoping the GMO goat will produce milk with spider silk proteins scientists can use to make bullet proof vests. And there are plenty more equally unusual combinations under experimentation.

There are two main genetic modifications that are common in commercial agriculture. One is plants that are modified so their genes carry insecticide to kill insect pests. Generally this is the bacterial insecticide Bt or Bacillus thuringiensis. There are different strains of Bt that kill various specific kinds of insects. And there are various Bt modified GMO commercial crops, maize, soy, canola, alfalfa, and others. Bt works by paralyzing the gut of the insect, or in some cases causing the stomach to explode.

The second main commercial modification of GMOs is plants that are resistant to herbicides. Most of these are resistant to the herbicide glyphosate, which is marketed by Monsanto under the name Roundup. GMO crops that resist this herbicide are called Roundup Ready. Ideally the farmer will spray Roundup on the crop, which will kill the weeds and leave the crop growing untouched. That may be true for the first years, but weeds soon develop tolerance. And new weeds that have natural tolerance start growing, requiring more and stronger herbicides every year. In parts of the US this has become so serious that even large scale farms have had to return to weeding by hand. Glyphosate is now considered a biocide, something that kills all forms of life. Yet when Monsanto began selling it they claimed it is as safe as table salt. And they still claim it is safe.

There are NO crops that are more drought or salt tolerant because of genetic modification,

NONE that have improved nutrition,

NONE that have genetically engineered traits helpful for surviving climate change.

Neither Bt nor HT crops increase YIELD. The empirical evidence of 20 years of official US data clearly demonstrates that traits for tolerance to drought, salt, sandy soils, clay soils, flood, etc as well as yield increase are being provided by traditional breeding techniques, NOT GM. Both Bt and HT crops are not sustainable methods of farming. They produce super weeds and insects and require increasing amounts of increasingly toxic chemicals to grow.

Despite this, GMO advocates constantly cry about how children will go blind and starve without GMOs.

In 1999 Arthur Anderson, LLP helped Monsanto design their strategic plan. First they asked Monsanto executives what their ideal future looked like in 15 to 20 years. The executives described a world with 100 percent of all commercial seeds would be genetically modified and patented. Anderson consultants then worked backwards from that goal, and developed the strategy and tactics to achieve it. They presented Monsanto with the steps and procedures needed *to obtain a place of industry dominance in a world in which natural seeds were virtually extinct*. Genetically modified seeds that could be patented were the tool designed to accomplish this objective.

That is what agribusiness intends for Ghana’s beloved diversity of foods and seeds, that they become virtually extinct. We will then be forced to buy new seeds each year from a limited selection of patented seeds that require increasingly toxic chemicals to grow. Seed prices will rise. After Bt cotton was introduced in India the price of cotton seed rose 8000%! By law, farmers could no longer save or sell seed.

Now they are starting field trials of Bt cotton in Ghana.

GMOs are the enemy of farmers, the enemy of small-holder farming in much of the developing world, and specifically in Ghana and Africa. Yet every UN agency report says that small-holder farming is key to providing food security, not GMOs. The the International Assessment of Agricultural Knowledge, Science and Technology for Development (IAASTD) confirms this, as does the latest UNCTAD [United Nations Conference on Trade and Development] report. I quote:

[AWAY] FROM a “green revolution”

TO a “truly ecological intensification” approach.

This means we must move away from monoculture-based and high external-input-dependent industrial production, and move towards mosaics of sustainable, regenerative production systems that also considerably improve the productivity of small-scale farmers. We need to see a move from a linear to a holistic approach in agricultural management, which recognizes that a farmer is not only a producer of agricultural goods, but also a manager of an agro-ecological system that provides quite a number of public goods and services including water, soil, landscape, energy, biodiversity, and recreation.

In France Professor Seralini of the Caen University found increased kidney and liver toxicity in rats fed GM maize leading to liver and kidney failure and premature death, especially in males. There was a general increase in tumors among the rats, especially mammary tumors. Females died prematurely from mammary tumors and pituitary dysfunction.
[http://gmoseralini.org/faq-items/what-were-the-studys-findings/]

Pigs are particularly important study subjects because their physiology and metabolism, particularly their digestive tract, resembles human physiology and metabolism. Research on pigs by Dr. Judy Carman in Australia reveals that GMOs in the diet inflame the digestive tract. Dr. Carman and her team discovered a 25% increase in uterus weight in the female animals fed the GM diet as compared to the control group. In addition, GM fed male pigs were four times more likely to be afflicted with severe stomach inflammation, while females had more than double the risk of the control group. Pigs with these problems go into our food supply and we eat them. [http://gmojudycarman.org/]

GMO pollen can blow across regions, across multiple countries, and contaminate the seed gene pool. Once this contamination occurs, it cannot be undone.  The chemicals herbicides and insecticides, used with GMO crops destroy soil microbes and beneficial insects. They kill the fertility of the soil and pollute the air and water.  Farming communities in the vicinity of GMO monoculture farming often suffer severe health problems they did not suffer before the introduction of GMO crops and related chemicals.
.
If GE seeds were safe and lived up to claims, if science might support these claims, the multinational corporations who own the patents would be glad to allow independent testing and encourage labeling. Instead they try to shut down testing and labeling altogether. The only testing they permit is sponsored and reviewed by them. By contract, you cannot buy their seed without agreeing that you will not run independent tests with it.

Monsanto began the commercialization of GMOs, with the help and support of
the USDA. Other chemical agribusiness corporations saw the goldmine and
followed Monsanto’s example.

Seed diversity around the world comes from the work and research of peasant
farmers over the centuries, saving seeds, and selecting those varieties that work best under varying conditions where they live. Smallholder peasant farmers have created and preserved the world’s seed diversity. Nations have a huge investment in these centuries of research and development by their farmers. Agribusiness is intent on destroying all that in the search for corporate hegemony.

Agribusiness corporations are arranging legal entitlement to themselves for the entire flora and fauna heritage of Africans. That is what UPOV laws laws protecting corporate intellectual property are about. [UPOV = International Unionfor the Protection of New Varieties of Plants] They will sell our seeds back to us for obscene profits, and use patents, their claims to intellectual property rights, as weapons to starve us into submission.

The Peasant Food Web encourages diversity through breeding millions of varieties of thousands of crops, nurturing thousands of livestock breeds and aquatic species, while the Industrial Food Chain has narrowed this vast cornucopia down to a dozen crops, a handful of livestock species and collapsing fish stocks.

The Industrial Food Chain wastes two-thirds of its food production,
it devastates ecosystems,
it causes over $4 trillion in damages worldwide,
and either under-nourishes or over-feeds 3.4 billion people.
The Peasant Food Web is environmentally and nutritionally constructive.

Ghanaians need to be part of the debate to decide, do we want to continue enjoying the foods we love, or do we want to become another link in the Industrial Food Chain. This decision should not be made in secret by a few elite conferring with international interests who are greedily eyeing Ghana’s farmlands. GMOs will harm our health and environment individually and collectively. Intellectual property rights and patents to living organisms threaten the very root of our ability to feed ourselves and choose our destiny.

Thank you very much for your kind attention.