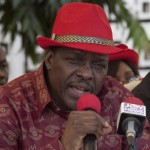 We wish to condemn in no uncertain terms, the attempts by the Majority Leader and Chairman of the Parliamentary Select Committee on Constitutional, Legal and Parliamentary Affairs, to distort and misrepresent our objections to the Plant Breeders’ Bill on the floor of the House, on Tuesday, 11th November, 2014. We do find this reprehensible behaviour to be sufficiently alarming and absolutely irresponsible enough to call for an independent body to investigate his conduct.

Towards the end of last year, following numerous petitions to the Parliament, the Speaker of the House, Rt Hon. Edward Korbly Doe Adjaho, suspended the legislative process of the Plant Breeders’ Bill, 2013, and requested a meeting with the various groups that had forwarded petitions to the Parliament, to which call Food Sovereignty Ghana responded on the 4th of December, 2013, and met with the relevant Parliamentary select Committee headed by Mr. Bagbin.

Again, in an opening statement of the Second Session of the Sixth Parliament on Tuesday, 28th January, 2014, the Speaker for the second time announced that he was referring  “this matter to the Leadership to consider and advise the Chair accordingly.” The Rt Hon. Adjaho in his statement directed that the leadership of the House considered thoroughly the Plant Breeders Bill, Biosafety Act and the related petitions sent in from the various organized bodies and ‘advise the Chair accordingly’.

Thereafter, a press conference was organised at which none of the petitioners were invited. At this press conference attempts were made to fool the public, pretending that the Plant Breeders Bill has nothing to do with GMOs. Various radio interviews, and statements by several members of the committee have systematically sought to bastardize the petitions and to defend the Bill as it stands, without paying any due attention to the fundamental concerns in these petitions. And, it appears, without having read the contents of the bill.

Again, on Thursday, 19th June 2014, the 1st Deputy Speaker, Hon. Ebow Burton-Oduro, drew the attention of the House to a report to be delivered by the Committee on the Plant Breeders’ Bill, as directed by the Speaker, before proceeding with its passage. To everybody’s surprise, Hon. Musaka Mubarak, NDC MP for Asawaso, and Majority Chief Whip, rose to his feet to declare that the Committee would present an “oral report”!

We were of the view that after Hon. Paapa Owusu-Ankomah, NPP, MP for Sekondi, had pointed out that it was a “straight-forward matter” and that a “written report” was exactly what was required, the Committee would comply with that, to enable civil society organisations assess how their petitions to Parliament had been treated. Unfortunately, after one whole year of back and forth, Mr. Bagbin chose to present an oral report in which he attempted to rubbish the petitions.

Why is Mr. Bagbin claiming we were made “aware of some of the proposed amendments that the Committee had made and some of the rationale behind some of the provisions”, when nothing of the sort happened? Why is his Committee refusing to make public the records of the proceedings of our meeting with them? Is he suggesting that our fundamental objection to the UPOV-compliant plant variety protection (PVP) regime was relaxed? We insist that Ghana is a member of the World Trade Organization and the rights and obligations concerning intellectual property are governed by the WTO Agreement on Trade Related Aspects of Intellectual Property Rights (TRIPS Agreement).

According to Article 27.3(b) of the TRIPS Agreement, Ghana has to provide protection ofplant varieties by an “effective sui generis” system. Sui generis means “unique to Ghana” system of protection.  A sui generis system will address what Ghanaian farmers actually need now, not what megacorporations want to impose on Ghana. We stand fundamentally opposed to any legislation that will make Ghana to cede her sovereignty over our food to faceless multinational corporations under the guise of joining UPOV. We do not need UPOV!

It has to be obvious to all Ghanaians that Mr. Bagbin has indeed done a shoddy job! The very fact that the Speaker again, for the third time, asked the Committee to do broader consultations “given the level of public comments” on the matter is the clearest testament of failure to properly represent the concerns of Ghanaians by this recalcitrant lawmaker. His behaviour obviously raises many an eye-brow!

There are only two ways to look at it: either Mr. Bagbin fails to comprehend the issues for reasons best known to himself, or he is radically corrupt.

Since we take the view that he qualified to be a Member of Parliament on the basis of demonstrably being of a sound mind, we suspect corruption. Hence our call for independent investigations. This call is buttressed by no other person but by Mr. Bagbin himself, when he recently made the startling confession at a seminar in Koforidua that “some Members of Parliament (MPs) take bribes to articulate the views of some individuals and organisations on the floor of Parliament”.

The story broke out at a two-day seminar organised by the Business Sector Advocacy Challenge (BUSAC) Fund, a donor-funded organisation which seeks to promote an enabling environment for the development and growth of the private sector through advocacy, and STAR Ghana, another such organisation. in Koforidua.

Present at the seminar were representatives of 40 non-governmental organisations (NGOs) which had sought to influence policy by having laws passed or changing the laws thought to be “inimical to national development”. The matter came out in the open, that “some participants who had dealt with some of the country’s legislators alleged that they had paid bribes to MPs to carry out their law-making functions”.

We know from the experiences in other countries to feel deeply worried about the murky world of the Monsanto lobby. For example, In Canada, “Veterinary scientists from Health Canada’s Human Safety Division testified … ‘We have been pressured and coerced to pass drugs of questionable safety, … officials from Monsanto Inc., the drug’s manufacturer, made an offer of between $1 million and $2 million to the scientists from Health Canada  — an offer that … could only have been interpreted as a bribe”

The mess that has characterized the passage of the bill, and the unprecedented abandonment of Parliamentary procedure was captured in the comments of the Speaker when he opined:

The question independent investigators must ask should include why Mr. Bagbin is misleading our Parliament by false pretences in order to pass the most reactionary law in the entire 500 years of Slavery and Colonialism? The Bill is perhaps the most outrageous encroachment of our sovereignty since the Crown Lands Bill of 1896 and the Lands Bill of 1897, which triggered the formation of the Aborigines Rights Protection Society!

Does Mr. Bagbin care so little for our beloved Ghana that he would offer dominion over our laws and lands to foreign corporations, with no protection for Ghanaians? Mr. Bagbin advocates passage of the Plant Breeders Bill including the infamous Clause 23 that cedes legal control of Ghana’s seeds and food supply to the domination of foreign corporations. Does he care so little for the lives and well-being of Ghana’s farmers that he advocates Clause 58, that criminalizes farmers if they save and use their own seeds? Does he really wish so much harm to Ghana that he advocates Clause 23?

Mr. Bagbin is clearly biting more than he can chew if he thinks he can ignore the wise counsel of civil society organisations, including faith-based organisations representing over 90% of Ghanaians! According to the proverb, “The one who swallows a coconut, trusts his anus”. The Majority Leader, Hon.Alban Kingsford Sumana Bagbin, Member of Parliament (MP) for Nadowli/Kaleo, quite obviously has an exaggerated confidence in the ability of his anus to deliver such a huge political coconut as he attempted to swallow publicly in Parliament last week!

We urgently call on Parliament to constitute an independent judicial inquiry to enable Parliament redeem its dented image caused by this sordid affair!