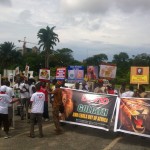 COMMUNIQUE: #marchMay23
Food Sovereignty Ghana (FSG) joined millions of people worldwide across 6 continents, 56 countries and 452 cities including 5 countries from Africa in the annual march against Monsanto. This year’s march was organized in collaboration with the Kanyan Akuafuo Kuo Society from the Brong Ahafo region in north central Ghana, Convention People’s Party (CPP) and the Vegetarian Association of Ghana.

Observing an annual ban on drumming and noise making imposed by the Ga Traditional Council, the March in Accra was silent with hundreds of participants wielding placards and marching through some of the principal streets of Accra. The second and more animated march took place at Goaso in the Brong Ahafo Region about 400 km north of Accra where different farming groups and organisations as well as opinion leaders joined members of Food Sovereignty Ghana to send a clear message to leadership and policy makers that the imposition of genetically modified organisms (GMO) crops on Ghanaians was absolutely unacceptable and not in the interest of Ghana’s sustainable future.

Some marchers gather before Monsanto office in Accra just before the march! #MarchAgainstMonsanto ACCRA pic.twitter.com/CGTQiqecCK

At around 7.30 am a group of early birds peacefully picketed with placards outside the show room of Dizengoff, a local supplier of Monsanto’s products located opposite The Ghanaian Times. This early photo opportunity has now made it all over the world. By 8.30 am a large gathering of anti GMO campaigners had converged at the premises of TV3 in Accra and by 9.30 am the March began in the company of a police escort. The marchers proceeded down the road to the car park of the Ghana Broadcasting Corporation (GBC) where the leadership were engaged in several interviews before continuing on the Ring road turning left at Nima Police station. After a brief stop at the Nima roundabout finally ending up at the Nima market where they interacted with the market women on the whole issue of GMO. Clearly the level of ignorance about GMO in the country is quite alarming given that Ghana being a signatory to the Cartagena Protocol is obliged to carry out mass education and public engagement for the general public on GMO

In Goaso in the Brong Ahafo Region 400 Km north of Accra, the march commenced from the premises of Nananom FM, through Goaso’s Municipal Streets to Kukuomu Mmem T-Junction finally ending up at Goaso Market. The turnout mainly made up of farmers was very encouraging, reflective of the fact that a large section of Ghanaians are already worried about the imposition of GMO in our agriculture.

Joining the March in Accra among other celebrities and local musicians was the Chairperson of the Convention Peoples Party (CPP), Madam Samia Nkrumah and a strong delegation of Party stalwarts which included Prof Akosah, Party Secretary Ivor Greenstreet, Deputy Spokesperson Ernesto Yeboah, Kojo Afari, Mrs. Dede Amanor-Wilks (CPP Parliamentary candidate for Ablekuma South Constituency) as well Party veterans, Aunty Lucy Annin a former MP in the Nkrumah government and Madam Borkor. Samia Nkrumah expressed delight at the manner in which the march was able to reach the grass roots and educate the masses. She cited the need for more education to counter the negative propaganda being advanced by the agribusiness lobby to impose GMO on the Ghanaian society and reminded the gathering of the CPP’s unshakable allegiance to the interest and welfare of the Ghanaian people.

Research studies have shown that Monsanto’s genetically-modified foods can lead to serious health conditions such as the development of cancer tumors, infertility and birth defects. Different placards communicated several messages including the following: “Vote with your cedis by buying organic” and “GMO means God Move Over”. “The WHO says Glyphosate may be carcinogenic”.

Prof Akosah a CPP senior member called on policy makers in Ghana to recognize these developments as clear red flags which should signal the need to reconsider Ghana’s need to begin growing GMO in the first place. He pointed out the fact that Ghana grows enough food to feed itself however lack of roads and storage facilities contribute to the unacceptable high post-harvest loss.

The March was very well attended and received coverage from a cross section of local as well as international media. Food Sovereignty Ghana maintains that the proposed UPOV-compliant Plant Breeders’ Bill should be abandoned and Parliament must adopt the African Union model which also meets the WTO requirements, guarantees the rights of small farmers, and does not put the entire nation at the mercy of foreign multinational corporations.