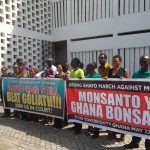 The Accra Human Rights High Court hearing the suit against the commercialisation of GMOs has ruled that the parties go for the determination of the motion to stay proceedings at the Court of Appeal on Wednesday, 28th March. The case, Food Sovereignty Ghana & 3 ors Vs National Biosafety Committee & 4 ors, Suit No. HRCM 43/15 was called on Monday March 19, 2018.  This was meant to continue with proceedings in the case originally brought before it on November 23, 2017.However, after the acknowledgement and presence of all legal representatives of the relevant parties in the case, the counsel for the fifth defendants, the Ghana National Association of Farmers & Fisherfolk (GNAFF),  Maame Sarpong who stood in for Bright  Okyere Adjekum  informed the court that they had filed a motion of stay of proceedings in the High Court pending an appeal that has been made by FSG on an earlier dismissal of an injunction sought on the release of genetically modified cowpeas and rice onto the Ghanaian market.Their lawyers present that the ruling that dismissed the injunction in 2015 has determined the matter.  On March 28th all parties are to appear in the Court of Appeal to hear the motion to stay proceeding at the High Court.  The court further ordered all parties to return to the Human Rights High Court on April 13th at 11 am.