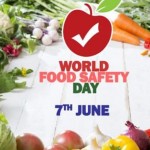 Food Sovereignty Ghana (FSG) joins billions of citizens around the world to celebrate World Food Safety Day with this year’s theme being “Safer Food, Better Health”. We find the theme very appropriate to inspire responsible and thorough policy making which will endure to the benefit of human health as well as that of animal life and the environment.

With the experiences of millions around the world on the real effects of climate change, it is crucial to ensure that in the food production value chain, there is a more ecological approach to protect the environment and biodiversity. We must see it our responsibility as consumers not to encourage businesses which pollute the earth while growing our food. We must make conscious decisions to support companies that manufacture in a responsible manner although our first preference should be to get access to fresh food from as close to home as possible.

We therefore repeat our call to the Environmental Protection Agency (EPA), Ministry of Agriculture and the Ministry of Health to ban the use of dangerous chemicals in our food production like glyphosate-based pesticides and herbicides. the International Agency for Research on Cancer (IARC) as well as the World Health Organisation have all expressed concerns about the effect of such chemicals on human health and the environment.

A little over four years ago, on 4th March, 2018, news broke out in Ghana, that “four persons have died at Akakpokope, a village in the South Tongu District of the Volta Region after consuming popular delicacy, banku and okro soup. The victims were said to belong to two separate families who coincidentally seemed to have eaten the same meal”. (See: 4 dead after eating banku and okro soup – https://t.co/PgciWmXcCI). Laboratory results confirmed “that the ‘Banku’ dish that claimed the lives of persons at Akakpokofe in the Volta Region contained some poisonous substances, according to the Food and Drugs Authority (FDA)”.

The victims complained of stomach ache after eating the popular Ghanaian staple, banku and okro soup, and died soon after they were admitted to the hospital. In a release issued Wednesday, 14th March, 2018, the FDA stated that “Laboratory results received…indicated the presence of Chlorpyrifos, a very toxic substance found in commonly used pesticides which when ingested can cause death. “… Banku deaths: Lab results reveal corn flour contained pesticide – FDA | General News 2018-03-14 https://t.co/iXGhR0yvkw

Even before the purchase and release of the chemical product to Ghanaian farmers by the Ministry of Food and Agriculture, Chlorpyrifos was already notorious as a neurotoxic insecticide linked to lower IQs and ADD in exposed children. We repeat the call for the ban of the use of such toxic and expensive imported inputs in our food production.

On this auspicious day FSG repeats its calls on the Ghana Food and Drugs Authority (FDA) to take all necessary measures to ensure that there is mandatory labelling of all food and feed in Ghana containing genetically modified organisms (GMO) as ingredients.

These concerns about our food safety come at a time when the National Biosafety Authority (NBA) has received an application for the commercial release of genetically modified cowpeas. As a civil society organisation interested in advocacy for the rights of citizens, we are very concerned that there exists no long term epidemiological studies on the consumption of a genetically modified cowpea anywhere in the world and so the claims of its safety are therefore not based on science and deliberately misleading to potential consumers who may have this as a valid concern before endorsing such a product for their families to consume.. The cowpea is a very important staple crop in Ghana and the entire sub-region and so the implications of the loss of biodiversity in local varieties upon the release of a GM Cowpea is something that we should see as a clear food security risk and certainly a violation of the nation’s food sovereignty as an indigenous home of the cowpea.

What FSG is asking for ought not to be controversial. The FDA’s own General Labelling Rules, 1992, (L. I. 1514) stipulate that food labelling be informative and accurate. Labelling of packaged and prepackaged products is for purposes of health, food safety and need to know. The minimum labelling requirements are that labelling should be clear, concise and in English. We insist that there is a need to know if the food or feed contains GMOs. Traceability and culpability leads to responsibility and responsibility leads to safety.

We wish to state categorically that our right to know what is in our food is a fundamental human right. It is not up for debate. There is no way our laws on the labelling of GMOs should be voluntary, as some stakeholders appear to be suggesting.

Ghana’s agriculture does not need GMOs. All the independent experts agree. As mentioned earlier in reference to the proposed release of a GM cowpea, there is no scientific consensus on the safety of GMOs. This is the position of independent scientists with expertise related to the subject, published in a reputed peer-reviewed scientific journal (see: https://t.co/PP917ONTfa).

A mandatory labeling regime is the only national effort that can be implemented to make Ghana’s food market unattractive for inferior goods that may be rejected by foreign markets and shipped to countries with weak and voluntary labeling legislation.

We also use this opportunity to send a message to the general public on the importance of observing strict hygiene and safety when it comes to the preparation and sale of food. It is essential to ensure the highest standards of cleanliness in the preparation spaces as well as the hygienic transportation of food from sources and to the customer.