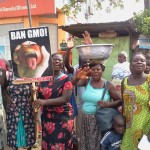 The Communications Directorate of Food Sovereignty Ghana would like to re-affirm its opposition to attempts by the powers that be to impose GM foods on Ghanaians without any form of public awareness and participation in such a vital and far-reaching decision. FSG therefore remains opposed to the development and commercialization of Genetically Modified Organisms (GMOs) in Ghana, and Africa for that matter.

In a statement released by Edwin Kweku Andoh Baffour, FSG’s Communication Director, he noted that the organisation wishes to distance itself from recent misleading utterances to the Ghana Broadcasting Corporation (GBC) by Mr. Kweku Dadzie, a former member, who was recently discharged from hospital in Accra. Below is the full statement:

An inaccurate report http://gbcghana.com/1.2690167 on GBC’s Radio Ghana on April 8th at approximately 2.30pm, quotes Mr. Dadzie as saying that “FSG is not against the introduction of GMO but rather against a communication gap between what the Council for Scientific & Industrial Research (CSIR) is doing towards the introduction of GMO’s and the implications for the public”.[sic]

It is most unfortunate that Mr. Dadzie makes such unfounded and misleading statements which apart from confusing the general public, seeks to malign the genuine efforts FSG is making in the protection of the sovereignty and integrity of Ghana’s food production system. We think that there is some mischief afoot to sow confusion and to distort our message by exploiting a sick person. We find it particularly unfortunate that the GMO lobby took ruthless advantage of Mr. Dadzie when he was just recovering from an illness.

The discerning public will recall FSG’s countless press statements as well as several public outreach activities aimed at increasing public awareness on the dangers of the imposition of GMOs on Ghanaians with its serious long term implications for human health and the environment. In line with the anti-GMOs stance taken by FSG since its inception two years ago, the organisation has been at the forefront of championing the call for more careful attention to policy-making regarding GMOs, citing many examples from abroad where the effects of GMOs on the populations have begun to take harmful effects. http://foodsovereigntyghana.org/ban-all-gm-foods-in-ghana/

FSG has been instrumental in getting other civil society groupings and religious organisations to join their call on key stakeholders in the food and agriculture industry in Ghana to reconsider the content of the proposed Plant Breeders Bill that was before Parliament. Direct meetings with the Parliamentary Select Committee on Constitutional, Legal and Parliamentary Affairs, and other high level consultations contributed to the directive by the Honourable Speaker of Parliament Mr. Doe Adjaho to put the bill on hold in the House to allow for more consultations with a wider stakeholder grouping.

Most importantly and quite contrary again to Mr. Dadzie’s recent misguided statement is the fact the FSG on February 17th of this year presented a writ in the Human Rights Division of the Fast Track High Court seeking an injunction against the Ministry of Food & Agriculture and the National Biosafety Committee from further developing and commercializing GMOs in Ghana. FSG still maintains that the National Biosafety Committee has unlawfully been operating in the sense that it failed to fully respect the Biosafety Act 2011 Act (831).

It is therefore quite clear that FSG remains completely opposed to any development or commercialization of GMOs in Ghana and its actions have shown the consistency of an organisation fully understanding its obligatory social responsibility to protect the rights of small scale farmers to produce organic food from natural seed selection processes, as well as to protect the rights of consumers as guaranteed by the constitution to be fully involved in any such decision-making.

We therefore make the earnest appeal that any enquiries on FSG, its mission and objectives and subsequent activities should be channelled to the Communications Directorate. Our official website clearly shows how to contact us.