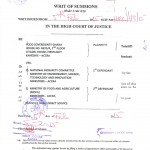 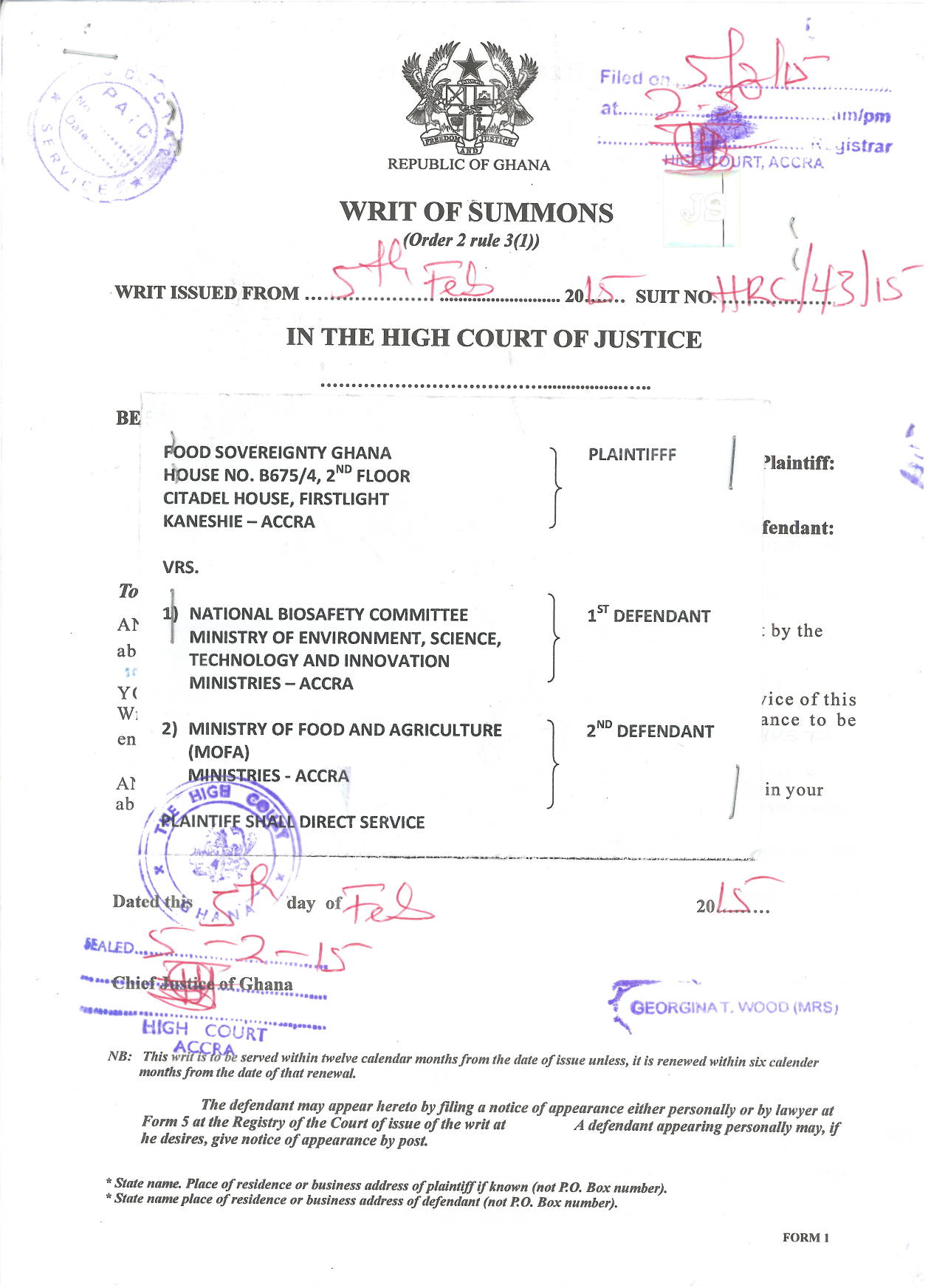 We are happy to announce that Food Sovereignty Ghana has filed a writ of summons against the National Biosafety Committee NBC and the Ministry of Food and Agriculture MoFA, with an application for an interim injunction to restrain the recalcitrant defendants from any release and commercialization of genetically modified cowpeas and rice until the provisions of the Biosafety Act are expressly and fully obeyed. We are not only calling for an injunction on the commercialisation of GM rice and Bt cowpeas, but on all GM crops until the National Biosafety Authority is in place.

We have taken this action as a result of the fact that Ghanaians are being constantly bombarded with news items containing false claims that the attempts to impose GM rice and beans or our precious “waakye”, or the famous fried plantain and beans, alias “red red”, are being done in accordance with the law!

We maintain that this is certainly and evidently not the case. Our case is very simple. According to Section 13 of the Biosafety Act, 2011, Act 831, on the “The application to import or place on the market”, only the National Biosafety Authority has such a power to authorize the commercial release of GM foods in Ghana. The law says:

“13. ( 1) A person shall not, without the prior written approval of the Authority, import or place on the market a genetically modified organism.
(2) An application under subsection (1) shall include
(a) The information set out in the Third Schedule
(b) a risk assessment as set out in the Third Schedule, and
(c) any other information that the applicant may consider necessary for an assessment of the potential risks and benefits of the requested activity.”
[See: Ghana Biosafety Act 831 31 Dec 2011.pdf]

Now, we all know that the National Biosafety Authority does not even exist, because it is yet to be inaugurated. No appointments have been made and approved even for it, so under what authority are those undertaking these dangerous experiments doing so, and who is supervising them? Apparently, even the National Biosafety Committee has no power of its own apart from the authority of the Minister for Industries, Science and Technology, MIST.

Ghana is a signatory to the Cartagena Protocol on Biosafety. Article 23 of the Protocol requires Parties, on their own and in cooperation with other States and international bodies, to promote and facilitate public awareness and education, including access to information, regarding the safe transfer, handling and use of living modified organisms (LMOs). It also requires Parties to consult the public in the decision-making process, to make public the final decision taken and to inform public about the means of access to the Biosafety Clearing-House.

For example, currently in Malawi, the Lilongwe University of Agriculture and Natural Resources, (LUANAR) applied for confined field trials of Bt cowpea, the same crop that Savannah Research Institute, (SARI) has been investigating for years. Whilst a copy of the LUANAR is readily available, there is still no trace of the SARI application even weeks after asking specifically for it! Here is a copy of the LUANAR application: Bunda College Application for Confined Field Trial (CFT) of Bt-Cowpea | Alliance for Food Sovereignty in Africa AFSA http://afsafrica.org/bunda-college-application-for-confined-field-trial-cft-of-bt-cowpea/

Meanwhile, Section 11 (1) of the Act states very clearly that: “A person shall not conduct a contained or confined use activity involving genetically modified organisms or their development without the written approval of the Authority”. The law further stipulates in Section 42 (2) that “The Authority shall publish notices of final decisions concerning applications made under this Act in the Gazette and electronic and print media”, in order to ensure public awareness and participation. This is a far cry from the secrecy surrounding the experiments currently going on in Ghana!

We maintain that none of these provisions are being respected. It even appears that the so-called National Biosafety Committee is being run from the office of the Minister of Industries, Science and Technology. We were extremely surprised to read from the reaction of Mr. Eric Okoree, Secretary to the National Biosafety Committee, stating inter alia, that “I have printed the request and submitted it to the Minister’s Secretariat for his information as per the Civil Service Procedure . He will minute it down to the Secretariat for action to be taken.”!

Up till now, several weeks after calling for copies of the documents on risk assessment and risk management and benefits supporting the application by the Savanna Agricultural research Institute (SARI), for the approval of field trials of Bt cow peas submitted for approval, no such document has been forth-coming. Meanwhile this is the sort of information that must be voluntarily be made available to members of the Ghanaian public in accordance with the law.

We find the situation of lawlessness surrounding the imposition of GMOs on Ghanaians most alarming as bisosafety is a matter of life and death. The most fraudulent aspect of this is the fact that in spite of the flagrant infringement of the Biosafety Act, the scientists behind these dangerous experiments keep informing the public that everything is being done in accordance with the law.

For example, in Ghanaian scientists edge up with GM rice trials http://www.modernghana.com/news/594252/1/ghanaian-scientists-edge-up-with-gm-rice-trials.html, published on 24 January 2015, they claim that “The confined field trials started in April 2013 at Nobewam in the Ashanti region, after receiving approval from the National Biosafety Committee (NBC).”

Principal Investigator, Dr. Maxwell Asante, further informed the press that “If the lead event is confirmed, we will request for permission from the NBC to allow it to be grown by farmers in Ghana after testing. The genes that make the GM rice nitrogen-use efficient will then be transferred to other varieties in Ghana through conventional breeding methods,”

What is most worrisome is the fact these these perpetrators are aware of the fact that “There is strong opposition to the introduction of GM crops in Ghana’s food production chain.”

Alarmingly, we also read, “Biosafety advocate, Albert Aubyn, however says there is no cause for worry with the current trials, noting that field activities are strictly in conformity with regulative measures”.

The story by Kofi Adu Domfeh ends with the assurances that “Three confined field trials of rice, cowpea and cotton are currently being evaluated in Ghana in compliance with the Biosafety Act 2011, Act 831, which regulates GMOs”.

Meanwhile, according to the Section 13 of the Biosafety Act, 2011, Act 831, on the “The application to import or place on the market”, it is the non-existent National Biosafety Authority which has the power to authorise the commercialisation of GM foods in the country, and not the National Biosafety Committee.

We call on all Ghanaians who care about the safety and the quality of food they are putting into their bodies, to show keen interest in this matter and provide us with the moral and material support we need to prosecute this case which is set to be a David versus Goliath struggle.