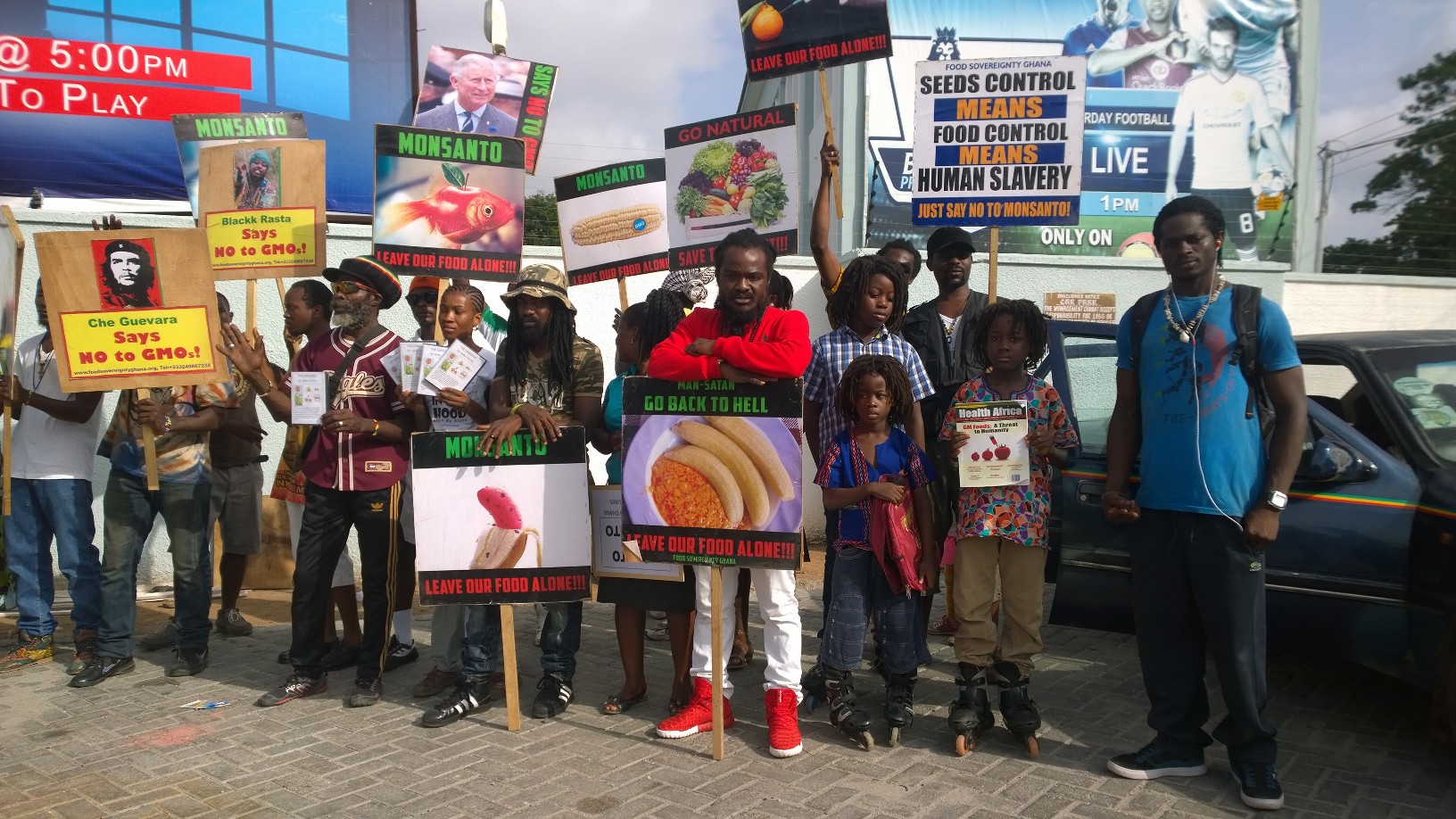 Food Sovereignty Ghana (FSG) joined millions of people worldwide across 6 continents, 56 countries and 452 cities including 16 cities in Africa in the annual march against Monsanto. This year’s march was organized with the support of the Peasant Farmers Association, The Convention People’s Party (CPP), The Rastafarai Council of Ghana, the Insight newspaper, the Vegetarian Association of Ghana, the African Youth Foundation and the Kwame Nkrumah Youth Group.

In observance of the annual ban on drumming and noise making imposed by the Ga Traditional Council, the March in Accra was tapered down with hundreds of participants wielding placards and marching silently through some of the principal streets of Accra. Food Sovereignty Ghana a grassroots based organisation dedicated to social justice has been championing the cause of stakeholder engagement and education around the issue of biotechnology in our agricultural and food production systems for over three years. A clear and consistent message has been sent to leadership and policy makers that the imposition of genetically modified organisms (GMO) on Ghanaians is absolutely unacceptable and not in the interest of Ghana’s sustainable future. 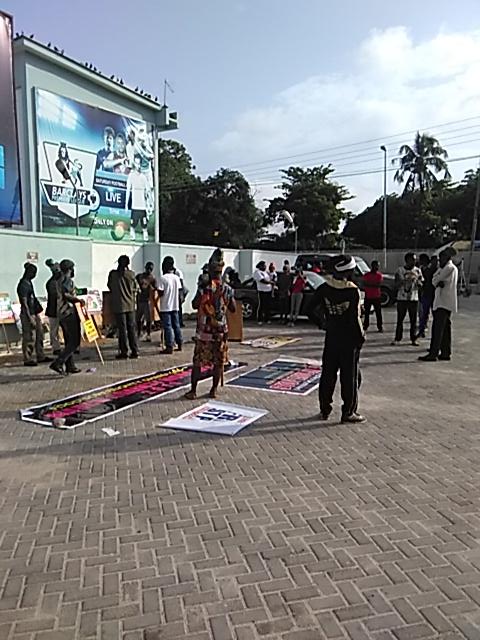 By around 7.00 am on Saturday morning the first group of supporters had converged at the premises of TV3 and by 8.30 a respectable number of anti GMO campaigners had gathered. By 9.30 am the March began in the company of a police escort. Marchers proceeded down the road to the car park of the Ghana Broadcasting Corporation (GBC) where the FSG Communication Director was interviewed by the state broadcaster before continuing on the Ring road, turning left after the Unibank Head office to climb the hill to Mallam Atta market. The procession continued onto the Kanda Highway eventually ending up at Kawukudi Park in Nima. It was very interesting to see the response of the public as most of them were unaware of anything like GMO despite the fact that legislators in 2011 passed a Bio Safety Act into law. There is a clear need for mass education and public engagement which is an obligation Ghana is bound by under the provisions of the Cartagena Protocol on Biosafety.

The marchers who came from across all walks of life included peasant farmers, parents, teachers, children, members of the Rastafarai Community, the Vegetarian Association of Ghana was very encouraging, reflective of the fact that a large section of Ghanaians are very concerned about the imposition of GMO in our agriculture.

Joining the March in Accra among other celebrities and local musicians were the former Chairperson of The Convention Peoples Party (CPP), Madam Samia Nkrumah, Party, Nene Ahuma Ocansey aka Daddy Bosco of the Rastafarai Council of Ghana, Sister Jessica of MUSIGHA, Ras Kuuku, Ras Revolution, Gold Teeth, members of the Free West Papua Campaign, and others. Also visible were several riders on horse back, branded with CPP colours. 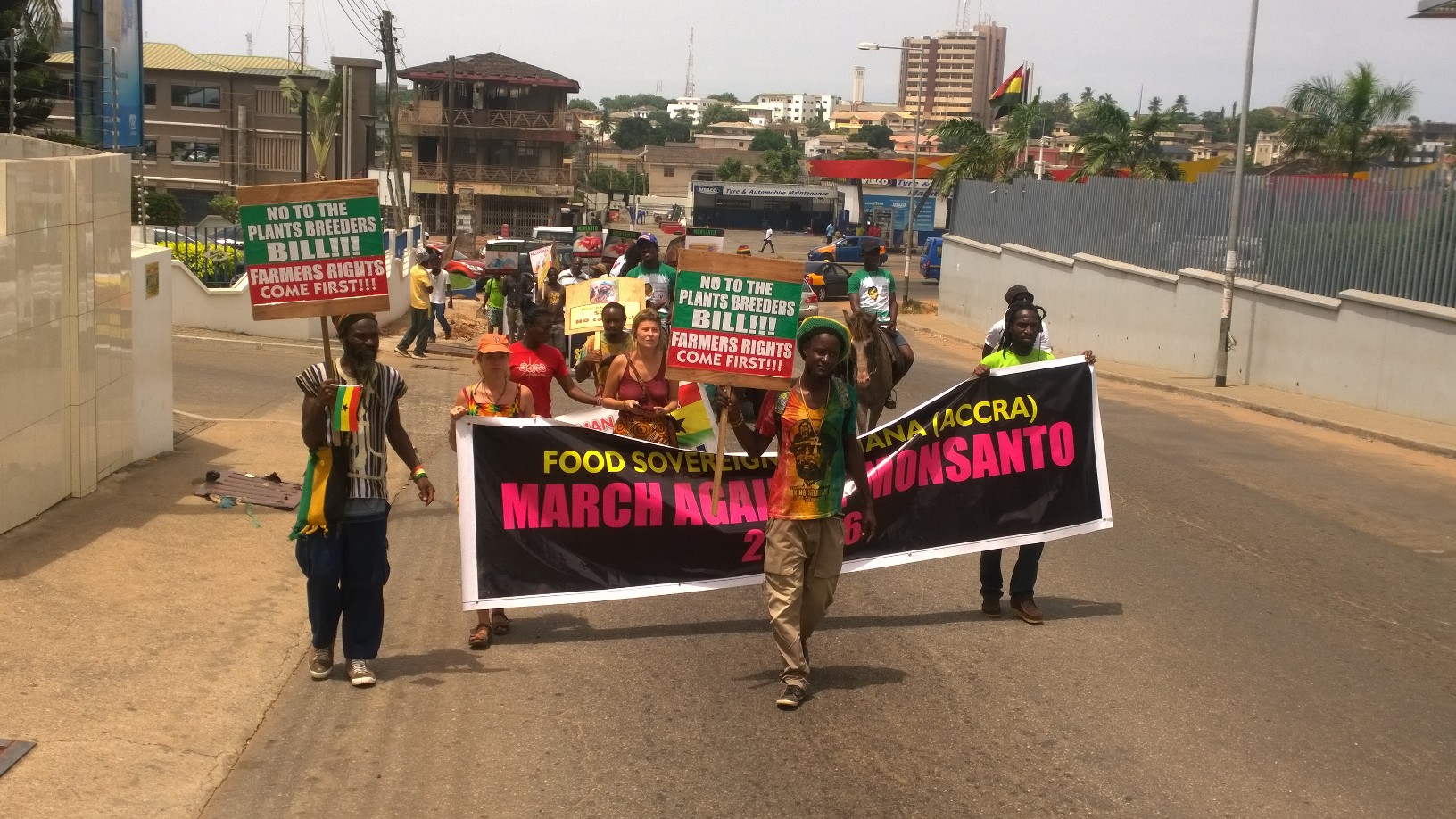 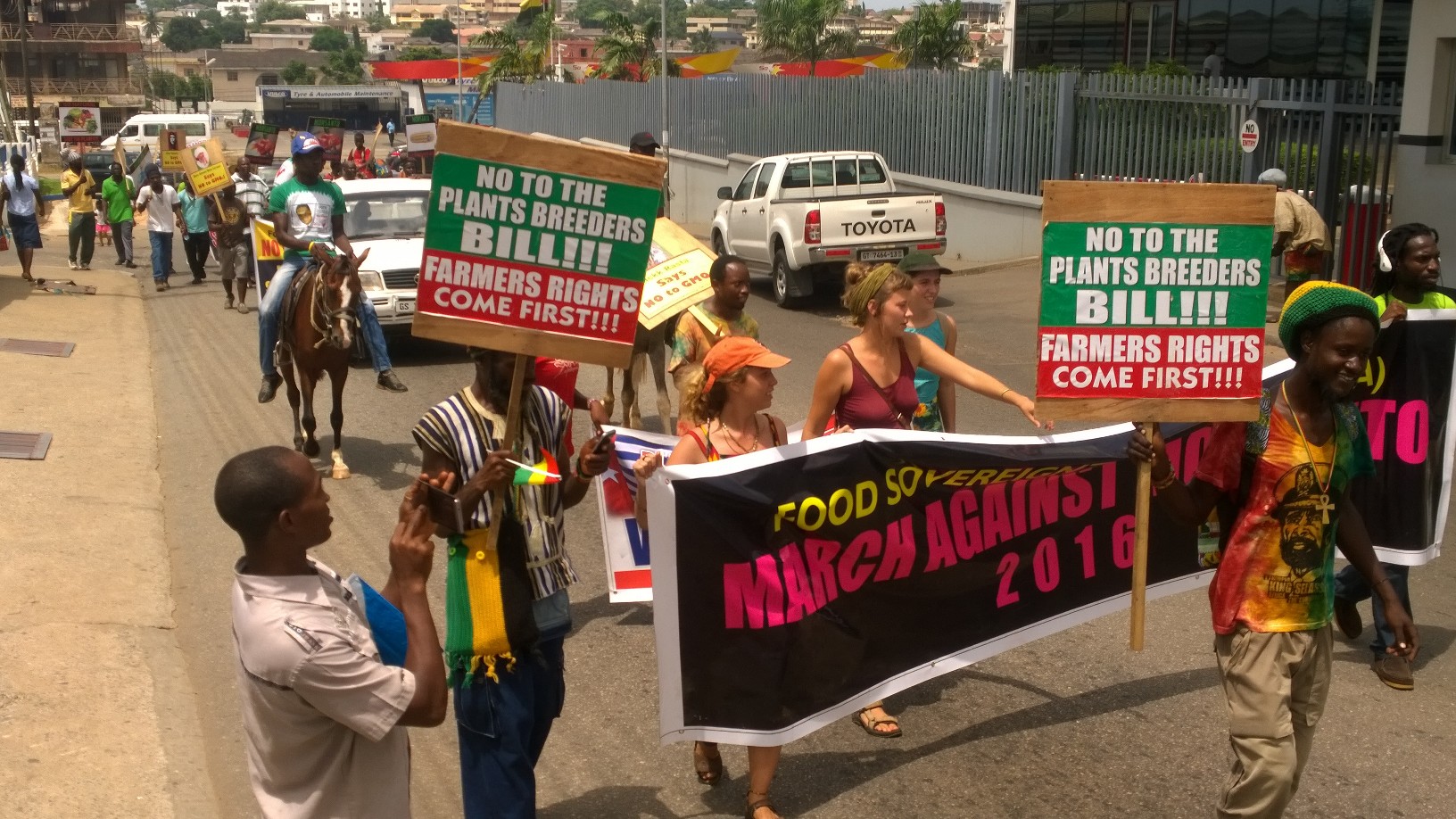 Research studies have shown that Monsanto’s genetically-modified foods can lead to serious health conditions such as the development of cancer, tumours, infertility and birth defects. Round up which is a glyphosate based chemical pesticide is heavily imported into the country and its negative effects on human health and the environment are of great concern.

FSG informed the gathered crowd that Burkina Faso who is a neighbour to Ghana had recently announced plans to abandon its five year old GM cotton agenda due to lower yields and poorer quality of fibre. What is then informing our policy makers in Ghana to proceed with field trials in the north when our neighbour has conclusive evidence against such a decision?

The March was very well attended and received coverage from a cross section of local as well as international media including the British Broadcasting Company (BBC). As the procession manoeuvred through the streets it was clear there was unanimous consensus against GMO by pedestrians, taxi drivers, market women and the general public who cheered on the marchers as they wielded their colourful and insightful placards. Food Sovereignty Ghana maintains that the proposed Plant Breeders’ Bill which will soon be on the floor of Parliament requires more stakeholder consultation in the interests of the Ghanaian farmer and consumer before it is passed into law. Parliamentarians who are supposed to represent the interest of their constituents all over the nation must actively do so and FSG’s call for the publication of a report on the said consultations that have allegedly taken place since November 2014 should be heeded.