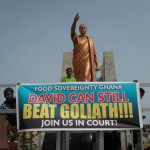 Ghana’s landmark GMO Court case in which Food Sovereignty Ghana (FSG) is suing the government of Ghana over the commercialization of genetically modified Bt cowpeas and GM rice goes to the Supreme Court on Tuesday, the 9th of July, 2019, at 9 am.

This follows a motion filed by one of the defendants invoking the superior jurisdiction of the Supreme Court in an order of certiorari directed at the Registrar of the Human Rights Court, for the purposes of quashing the ruling of the court dated 16th May, 2019 on the jurisdiction of the High Court to hear the case, Food Sovereignty Ghana & 3 Ors vs National Biosafety Committee & 4 Ors.

In the last appearance before the august court, Her Ladyship Justice Gifty Agyei Addo ruled in favour of FSG, that the jurisdiction of the Human Rights High Court was properly invoked to seek the reliefs sought by the plaintiffs given that the tribunal of the National Biosafety Authority (NBA) to which the defendants claimed should have been the proper body to hear such a case had not been properly constituted as required by law as of the time the case was first filed.

The defendants had raised issues dealing with the jurisdiction of the High Court to deliberate on case. They cited Section 26 of the Biosafety Act 831 which establishes a tribunal for resolving issues relating to bio-engineering technology. FSG prayed the court to focus on the illegalities committed by the NBA, which included the setting up of their Tribunal, for which we are seeking remedies. For example, at the time of going to court, the members of the Appeals Tribunal had not even been gazetted as required under Section 26 (2) which states clearly that, “The members of the Appeals Tribunal shall be appointed by the Minister and the appointments shall be published in the Gazette”.

The High Court ruling marked the second victory in a row against the defendants. The first one was an attempt to throw out the case in the Appeals Court on the grounds that the ruling on the interlocutory injunction against the intended release of BT Cowpea and GM Rice until the final determination of the suit, arguing that the court ruling had determined the entire case. This was thrown out by the Appeals Court. The second was challenging the jurisdiction of the court, which just saw the court ruling in favour of the plaintiffs. This is the case that has now been sent to the Supreme Court.

We are confident that the Highest Court in the land will appreciate the intention, meaning and purpose of the law as prescribed in our constitution to protect the interest of citizens where it may apply. It is the contention of FSG that what the Section 26 of the Act, which the defendants are using to challenge the jurisdiction of the court really shows, is yet another example of the several breeches of the Biosafety Act, for which we are already before the court. FSG is therefore praying the court to dismiss their petition, as these breaches clearly justify the jurisdiction of the Human Rights Court over the case.