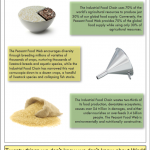 Seed diversity around the world comes from the work and research of peasant farmers over the centuries, saving seeds, and selecting those varieties that work best under varying conditions where they live. Smallholder peasant farmers have created and preserved the world’s seed diversity. Agribusiness is intent on destroying all that in the search for corporate hegemony.

The ETC Group, the Action Group on Erosion, Technology, and Concentration has released the report: Putting the Cartel Before the Horse …and Farm, Seeds, Soil, Peasants, etc. Who Will Control Agricultural Inputs, 2013? You can read the whole report in PDF form below.

The report details how the agribusiness giants have gobbled up most of the seed and agrochemical companies and control most of the agriculture in the US and Europe. They have nowhere left to expand there.  So they are now aiming to take over the agriculture of the global south, particularly Africa.  Peasant farmers, who feed at least70% of the world’s population – are not tied to the corporate seed chain. The agribusiness giants want to tie them in. They are focusing on “education” which seeks primarily to stop farmers from saving seeds.

We know from the report that:

SEEDS: The world’s top three corporations control over half (53%) of the world’s commercial seed market; the top ten control over three-quarters (76%).

The argument in favour of “too big to fail” agro-industrial giantsrests on a single powerful myth:

Unless we intensify food production with the North’s genetically-engineered seeds, agrochemicals, synthetic fertilizers and corporate breeding stock, the world’s burgeoning population, living in the midst of climate change, will not have food to eat. In reality, the industrial food chain offers a very incomplete (and distorted) picture of global food and agricultural production. The agro-industrial farming system has been spectacularly successful at encouraging uniformity, destroying diversity, polluting soil and water, corroding human health and impoverishing farm labour.

By contrast, peasants, indigenous peoples and civil society organizations are building and promoting alternative food systems based on diversity, democracy and food sovereignty.

The peasant food web is largely ignored or invisible to policymakers who grapple with food, farming and climate crises. This must change.

Recent studies confirm what farming communities already know: the formal seed sector does not have the capacity to supply the diversity needed in sustainable farming systems or to meet the need for locally adapted varieties, especially in the face of climate change.

To turn a profit, the giant seed companies need an enabling regulatory environment with legislation protecting corporate IPR, (Intellectual Property Rights, sometimes just called IP, Intellectual Property). GMOs were developed because they can be used to establish and enforce IPR, and therefore control the seed market.  The agribusiness model is: We, the corporations, own the seeds.  You, the farmer, cannot save or replant them by law; you must buy new seeds every year from us, the corporations.

A spokesman for the industry group, The American Seed Association, has stated that saving seeds is something they do not want to encourage in any way shape or form.  This is the reason for the push to enact UPOV 91.  There is coordinated pressure, particularly on African governments to enforce IP in agriculture by adopting and making operational the 1991 Act of the International Convention for the Protection of New Varieties of Plants, known as UPOV 91.  UPOV 91 prohibits the exchange of protected varieties between farmers (including through sale, barter or gift) and restricts the practice of farm-saved seed, forcing farmers to buy seeds every planting season.  Instead of protecting plants, UPOV protects corporations, not farmers, not seeds.  UPOV locks farmers into a limited selection of patented corporate seeds.

These patented corporate seeds will not grow unless the farmers also buy and use agrochemicals from the same corporations, locking farmers into spiraling debt and often loss of their farms.

The US, agribusiness companies and the NGOs they fund are bringing huge pressure to bear on Ghana’s government to pass UPOV.  If we are to retain our freedom to plant, grow, and eat the foods we love; if we are to save their seeds and plant them again, all Ghanaians must join to fight the imposition of UPOV.

In addition to blocking and defeating UPOV, Ghana and other African governments need to take important legislative steps to protect national agricultural diversity, the land, water, air, the plants, animals, and people of a nation. The ETC Group has legislative recommendations for national governments that the government of Ghana would do well to consider. These include: 1. Whenever four or fewer enterprises control 25% or more of sales in any commercial sector relevant to food and agriculture, in any one of the three most recent years for which data are available:

a) The corporate clique should be dismantled so that it does not collectively control more than 25% of the market and no single enterprise controls more than 10%;

c) If a cartel is identified, all forms of intellectual property held by any member of a cartel, relevant to the operations of the cartel, should be rescinded and made public.

2. Enterprises should be required to make publicly available any information previously regarded as “confidential business information” that is relevant to determining market share and defining inter-firm arrangements such as strategic alliances and joint ventures.

3. Competition policy should make it unlawful for any enterprise to sell seeds whose viability and/or productivity is dependent on that same enterprise’s agrochemicals.

4. Governments should strengthen or implement national competition policies that include strong anti-monopoly and combines provisions that protect small food producers and consumers, as an effective mechanism to impede cartel formation. See the report for more eye-opening information: http://www.etcgroup.org/putting_the_cartel_before_the_horse_2013

Putting the Cartel before the Horse…and Farm, Seeds, Soil and Peasants etc: Who Will Control the Agricultural Inputs? The State of Corporate Concentration, 2013: http://www.etcgroup.org/putting_the_cartel_before_the_horse_2013