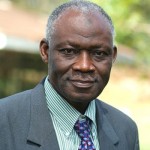 Food Sovereignty Ghana is shocked by the pronouncements of Prof. Walter Sandow Alhassan urging farmers to reject warnings from anti-GMO groups telling us that accepting GMOs will result in “seed colonisation and seed slavery”.

Prof. Alhassan was quoted as calling for groups like FSG to be “abhorred”, because, according to him, “those groups do not have any scientific proof or knowledge to offer when it comes to Genetically Modified Organisms (GMO) technology”.

In truth, Ghanaian farmers need to abhor and reject scientists laden with conflicts of interest. Monsanto and Syngenta are particularly greedy to get their hands on Ghana’s agriculture and control the seed market here. Professor Alhassan is their key servant helping to make this grab possible. Professor Alhassan is attempting to control the information farmers and the public see and hear just like the industry he represents.

Professor Alhassan has had most of his life and career funded by the biotech industry. Some by Monsanto, particularly his education and early history, and more later by Syngenta and the Syngenta Foundation.(1) Naturally he supports genetically modified organisms, GMOs. He has spent his entire life in their service. He is Syngenta’s man in Ghana.

“Today, large numbers of scientists are in the employ of Big Pharma, Big Ag, and all kinds of corporations with anti-environmental and anti-social justice agendas.”(2) Professor Alhassan is a key employee of Big Ag, and has been for his entire career.

“Monsanto and other multimillion-dollar agribusiness firms have been suppressing independent research on their genetically engineered crops for decades.”(2) And they lie about GMOs as well. Monsanto has just been forced to withdraw advertisements in South Africa because of unsubstantiated information and FALSE CLAIMS that GMO crops: “enable us to produce more food sustainably whilst using fewer resources; provide a healthier environment by saving on pesticides; decrease greenhouse gas emissions and increase crop yields substantially”. (3) None of these claims are true. Yet we hear Professor Alhassan and his network repeating these same lies over and over again and calling them science.

When Dr. Alhassan warns that anti GMO groups do not have any scientific proof or knowledge to offer when it comes to Genetically Modified Organisms (GMOs) technology, and therefore should be abhorred, he is being deliberately untruthful and he knows it. In fact he is trying to suppress scientific inquiry and knowledge. More information on the dangers of GMO pesticide plants comes out everyday, this despite the fact that the biotechnology industry has done its best to suppress any studies or information that does not support industry claims.

Genetic engineering is about private corporate control of the food system. (4)

Right now Professor Alhassan and his corporate and academic cronies are trying to get Bt cowpeas into the Ghanaian market. Bt cowpeas are pesticides as are all Bt GMO plants. When Ghanaians eat Bt cowpeas they will be eating pesticides. In the US Bt plants are registered as pesticides by the USDA. When you eat any part of a Bt plant, you are eating a toxic pesticide. Although Bt does occur in nature, that is quite different than having a plant which contains Bt toxin in every cell of the plant.

With Bt in nature, and when used as a dust or spray in agroecological farming: “The ACTIVE TOXIN can only be found IN THE GUT OF THE INSECT” (5). The plant itself contains no Bt. If there is any residual spray or dust on the surface of the plant it can be washed off.

However, with the Bt in GMO cowpeas and all other Bt GMO plants: “ACTIVE TOXIN IS IN EVERY PLANT CELL AND TISSUE, ALL THE TIME and cannot be washed off. … As far as safety is concerned, the “active toxins are not easily degraded by gut enzymes and, since they are lectins, they all are very likely to bind to the wall of the mammalian/human gut.”(5) And that means they are likely to be processed into your body creating who knows what short term or long term health risks and dangers.

Those insects that are controlled and killed by the Bt in Bt GMO plants are likely to evolve a tolerance for the Bt toxin and come back stronger over time. Other opportunistic varieties of insect will take advantage of the lack of competition and move in to take the place of the former pests creating new super pests. That is happening in the US where GMOs have been around for 20 years. It is leading to more and stronger pesticides being used every year, endangering the health of humans and livestock, degrading and polluting the soil, water, and air across US farmlands.

It is particularly worrisome to have Bt cowpeas growing in Ghana, a species indigenous to West Africa. One of the things GMO crops do is contaminate neighboring crops with their pollen. Grown in quantity, GMO cowpeas could contaminate the entire region of West Africa. Because of this kind of contamination, Mexico banned growing Bt corn. If the Ghana Plant Breeders Bill is passed, it would allow the corporate GMO owners to claim all offspring of that contamination as their own property according to their intellectual property rights. They could force a farmer whose crop is contaminated to pay for the contaminated crop, to pay damages to the corporation! They could force farmers to destroy their crops. This is happening across the United States and in Canada where corporations are winning huge judgement debts against farmers. It is happening in other countries that have passed UPOV laws such as Ghana’s Plant Breeders Bill. This is what Professor Alhassan intends to bring to Ghana’s farmers, claiming it is progress and calling it science. It is just old fashioned greed.

Contamination of the West African cowpea means the destruction of Ghana’s heritage, destruction of the seed DNA Ghana’s farmers, going back generations and centuries, have laboured to develop and preserve. This is biopiracy, made legal by the Plant Breeders Bill. Professor Walter Alhassan calls this destruction science. It is a tool by which “Corporations profit, Western governments gain control”(6) of Ghana, control of the entire West African region, and control of the continent of Africa.

(3) Monsanto Forced To Pull Advertisement Because Someone Actually Fact-Checked Them http://www.dcclothesline.com/2015/02/07/monsanto-forced-pull-advertisement-someone-actually-fact-checked/

(5) Bt in organic farming and GM plants – the difference : www.gmwatch.org/latest-listing/40-2001/1058-bt-in-organic-farming-and-gm-crops-the-difference-

(6) The Re-Colonization of Africa http://www.commondreams.org/views/2015/02/06/re-colonization-africa