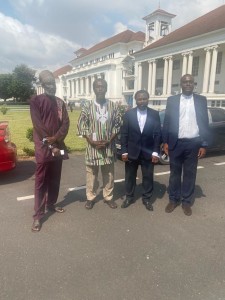 Ghana’s first trial on the introduction of genetically modified foods into our agriculture.The case for Food Sovereignty Ghana & 3 ors Vs National Biosafety Committee & 4 ors, SUIT NO. HRC/43/15, appeared before the Human Rights High Court in Accra on  February 16th and 17th 2022 in a continuation of the trial of Ghana’s first legal challenge of bioengineering in food.FSG’s Communications Director, Edwin Kweku Andoh Baffour sat in the witness box for cross examination by the Counsel for the 1st to 4th defendants on February 16th and the proceedings continued on February 17th. Counsel for the fifth defendant also cross examined FSG’s witness. Lawyer Wayoe Ghanamannti raised several objections and also took a turn at cross examining the witness to establish the crux of his testimony with the court.The court set March 1st 2022 as the date for the plaintiff’s second witness, Dr Christoph Then to be cross examined.Dr. Christoph Then is Executive Director of Testbiotech (www.testbiotech.org). He studied veterinary medicine and has been working for about 20 years on issues in the field of biotechnology.From 1992 until 1998 he coordinated the No Patent On Life! campaign in Germany. Till end of 2007 he was Greenpeace Germany’s expert and also Head of Department on Agriculture, Genetic Engineering and Consumer Affairs.Testbiotech is acting as an independent expert group, dealing with the impact assessment of biotechnology. Testbiotech promotes independent research, examines ethical, social and economic issues and assesses risks to health and the environment. “No Patents On Seeds!” is an international coalition of civil society groups that is calling for the prohibition of patents on plants and animals.FSG will again call as witness, Prof Latham from the USA to assist with this genetic engineering debate. We shall be announcing the details soon.FSG is most grateful to these world-renowned scientists for graciously agreeing to testify on our behalf. We believe that Ghana is blessed to have these two genetic engineering experts to explain this highly scientific matter to the Court of Ghana because this is a critical global matter and not just about Ghana gov’t policy of getting Ghanaians to eat GMOs.FSG has for the past nine years been advocating against the introduction of genetically modified organisms (GMO) in Ghana’s agriculture.Seven years ago in 2015, at the first announcement of plans to commercially release genetically modified cowpeas and rice on the Ghanaian market by government agencies, FSG was left with no choice but to sue the relevant bodies connected to the intended approval for commercial release of Bt cowpeas and NEWEST rice. The case was filed in March 2015.FSG’s main concern was that this was the first time humans were going to feed on this type of GM Cowpea.Crucially, of great significance, is the absence of any long term epidemiological studies regarding its effects on human health and the environment.The release  carrying news of an application for commercial release was also problematic because according to the Ghanaian Scientists themselves, the GMO cowpea would look no different from the conventional Songotra variety grown locally.FSG’s Counsel, Lawyer Wayoe Ghanamannti, is holding forth in Court and we pray and know that the good spirits of the good people of Ghana are with FSG and our legal team as we fight to protect the food we all eat as citizens.Hearing continues for our first witness, Communications Director, Edwin Kweku Andoh Baffour. The court adjourned till February 28th at 1pm.