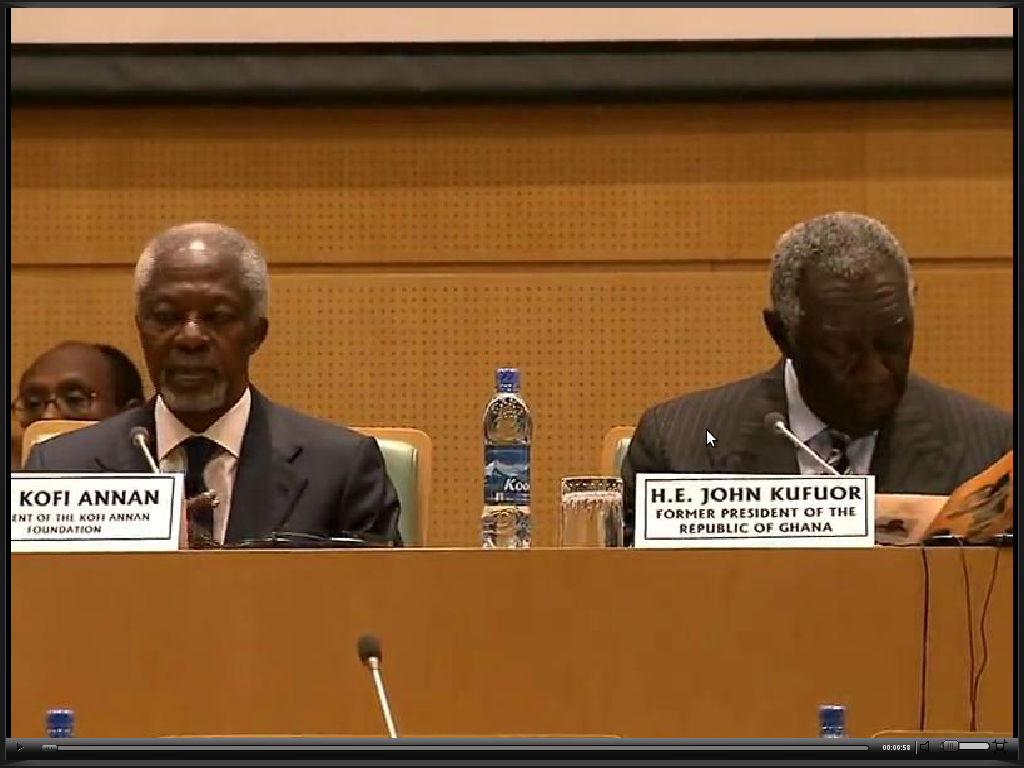 On 31st August, 2014, former president John Agyekum Kufuor was visibly miss­ing in action during the New Patriotic Party’s (NPPs) Special Delegates’ Congress to prune the number of the party’s presidential candidates from seven to five. He was on his way attending the 2014 African Green Revolution Forum, 01-04 September 2014, in Addis Ababa, Ethiopia.

The former President would have the whole world to believe that his absence at the Engineering Auditorium at the Kwame Nkrumah University of Science and Technology (KNUST), where he was supposed to cast his vote was for what his spokesperson, Mr. Frank Agyekum called “strategic reasons”.

The truth of the matter is that he was physically present at Addis Ababa, where a substantial per diem was awaiting him. Instead of saying the truth, he preferred to put a spin on his absence by claiming neutrality, Mr. Frank Agyekum, spokesperson for the former President, had stated that his boss took the position not to vote because he sees himself as a statesman.

“He is part of the process but he is not voting because he sees himself as an elder statesman on both na­tional and party affairs. The process and the tensions in the NPP as it is today, it is best if he doesn’t show his support for one candidate or the other.”

Mr. Kufour was however seen in the Ethiopian capital campaigning for the introduction of GM foods in Africa, under guise of what he called “climate-smart agriculture”! According to the ex-president, speaking in a panel discussion of the ‘Global Panel on Agriculture for Food Systems and Nutrition’ at the 2014 African Green Revolution Forum, “Agriculture is now under sustained threat from Climate Change and hence the call for Climate-Smart Agriculture,”

Mr. Kufuor’s per diem was paid for by the GMO Green Revolution sponsors.  We do not begrudge him for ditching his party and going in pursuit of per diems with a pack of lies. What we take strong exception to is the rather mischievous manner he seeks to return the GMO favour by spouting GMO lies about helping fight climate change and producing larger yields.

Even if the highly questionable claims of increases in food or crop yields, or drought-resistant flood-resistant GM crops were true, the ever increasing amounts of pesticide toxins they contain should prohibit their production or use. Toxic food, regardless of abundance, does not replace safe and edible food.

GMOs, and the legal framework that permits and sustains them, are not business as usual but an orchestrated attempt to control our food, our land, our water. GMOs and their legal framework offer foreign corporations permanent control over our destiny as individuals and as a nation.  These laws, the Biosafety Act, Seed Laws, and UPOV laws such as the Plant Breeders Bill are sometimes referred to as weapons of legal destruction.  They place corporate interests and greed above the laws of nations. They leave the entire budgets of nations vulnerable to corporate whims.

For 20 years these chemical corporations behind the GM scam have been selling herbicides and pesticides as part of food and doing very little to produce any plant that increases yield, and produced none that are climate-smart. Mr. Kufour continues his legacy of trying to sell Ghana to the west for his own profit, and is willing to destroy Ghana’s agriculture and small farmers in the process. For Life, the Environment, and Social Justice!