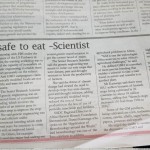 The attention of Food Sovereignty Ghana (FSG) has been drawn to a publication on Tuesday, 24 October, 2017 by the Ghanaian Times, in which a research scientist at the Biotechnology and Nuclear Agriculture Research Institute of the Ghana Atomic Energy Commission, Dr. Vivian Oduro, is reported to have stated that “Genetically Modified Organism (GMO) foods are safe to eat and has no health risk for consumers”.

According to the report, Dr. Oduro “gave the assurance” at a day’s Ghana Biotech Media Outreach in Accra organised by the National Biosafety Authority (NBA) in partnership with Program for Biosafety Systems (PBS) under the auspices of the US Embassy.

FSG finds it pathetically ironic that such reckless comments could come from a Senior Research Scientist of a reputable institution as the Ghana Atomic Energy Commission, and most especially, at what was billed to be a “training workshop” intended “to build capacity of journalists on genetic engineering to enable them report accurately on the subject”.

Dr. Oduro’s astonishing claims go against years of efforts by scientists culminating in the creation of important international agreements such as the Cartagena Protocol on Biosafety and the UN’s Codex Alimentarius which show widespread recognition of risks posed by GM foods and crops. The Cartagena Protocol on Biosafety, ratified by 166 governments seeks to protect biological diversity from the risks posed by GM technology. The UN’s Codex Alimentarius, worked with scientific experts for 7 years to develop international guidelines for the assessment of GM foods and crops because of concerns about the risks they pose.

It would have still been misleading even if Dr. Oduro had used the duplicitous language often used by the active pro-industry propagandists such as “genetically modified organisms for food, feed and processing that have been approved in accordance with international guidelines for risk assessment are as safe as the conventional counterpart.”

The point is that there is not a single regulatory body approving GMOs anywhere “in accordance with international guidelines for risk assessment.” For example, the US that is leading the pro-GM lobby in Ghana, does very little to conform to the minimum standards of regulation of GMOs. Indeed, Prof. David Schubert, professor and head, Cellular Neurobiology Laboratory, Salk Institute, commenting on a comprehensive peer-reviewed study of US government’s regulation of GMOs that he co-authored stated:

“One thing that surprised us is that US regulators rely almost exclusively on information provided by the biotech crop developer, and those data are not published in journals or subjected to peer review…The picture that emerges from our study of US regulation of GM foods is a rubber-stamp ‘approval process’ designed to increase public confidence in, but not ensure the safety of, genetically engineered foods.” – USA: Food and Drug Administration (FDA): GMO Seralini http://www.gmoseralini.org/fda/

Which GMO is Dr. Oduro talking about, when independent peer-reviewed claims involving scientists, physicians, academics, and experts from disciplines relevant to the scientific, legal, social and safety assessment aspects of genetically modified organisms (GMOs), strongly reject claims by GM seed developers and some scientists, commentators, and journalists that there is a “scientific consensus” on GMO safety.”? See: No scientific consensus on GMO safety http://www.ensser.org/increasing-public-information/no-scientific-consensus-on-gmo-safety/ The statement makes a clearly verifiable and incontrovertible observation that:

“It is often claimed that ‘trillions of GM meals’ have been eaten in the US with no ill effects. However, no epidemiological studies in human populations have been carried out to establish whether there are any health effects associated with GM food consumption. As GM foods are not labelled in North America, a major producer and consumer of GM crops, it is scientifically impossible to trace, let alone study, patterns of consumption and their impacts. Therefore, claims that GM foods are safe for human health based on the experience of North American populations have no scientific basis”.

It is not even that the companies whose products the pro-GM lobbyists are busy defending even care about independent research. They discourage it. As a precondition to buy seeds, either to plant for crops or to use in research study, Monsanto and the gene giant companies must first sign an End User Agreement with the company. Monsanto, Pioneer (DuPont) and Syngenta require anyone buying their GMO seeds to sign an agreement that explicitly forbids that the seeds be used for any independent research.

As F. William Engdahl observes, “Scientists are prohibited from testing a seed to explore under what conditions it flourishes or even fails. They cannot compare any characteristics of the GMO seed with any other GMO or non-GMO seeds from another company. Most alarming, they are prohibited from examining whether the genetically modified crops lead to unintended side-effects either in the environment or in animals or humans”. “GMO Scandal: The Long Term Effects of Genetically Modified Food in Humans”, by F. William Engdahl, Voltaire Network, 15 September 2009, www.voltairenet.org/article162087.html

Independent scientists, including some of the brightest and best in the field have come under severe attacks, their reputations ruined, after coming out with adverse findings. These include Dr. Árpád Pusztai, Professor Gilles-Éric Séralini, Kevin Bradley, and reputable international organisations such as the World Health Organization’s International Agency for Research on Cancer (IARC) after IARC scientists declared glyphosate a probable human carcinogen in March 2015.

In 1998, Dr. Árpád Pusztai a world expert on plant lectins and nutritionist who spent 36 years at the Rowett Research Institute in Aberdeen, Scotland, publicly announced that the results of his research showed feeding genetically modified potatoes to rats had negative effects on their stomach lining and immune system. The fight back was immediate. Dr. Pusztai was suspended and his annual contract was not renewed. Árpád Pusztai – Wikipedia https://en.wikipedia.org/wiki/%C3%81rp%C3%A1d_Pusztai.

The list of scientists who have come under attack is almost endless and the attacks are ongoing. Currently, Prof. Kevin Bradley, a professor of weed science at the University of Missouri, and a half-dozen other university weed scientists have come under attack after confronting what they believe are misleading and scientifically unfounded claims by Monsanto new “low-volatility” formulations of dicamba. Monsanto Attacks Scientists After Studies Show Trouble For Weedkiller Dicamba – Slashdot https://science.slashdot.org/story/17/10/26/214219/monsanto-attacks-scientists-after-studies-show-trouble-for-weedkiller-dicamba

Brent Wisner, an attorney from the firm that released the documents, told journalist Carey Gillam, who is also the research director for U.S. Right to Know. “These show that Monsanto has deliberately been stopping studies that look bad for them, ghostwriting literature and engaging in a whole host of corporate malfeasance. They (Monsanto) have been telling everybody that these products are safe because regulators have said they are safe, but it turns out that Monsanto has been in bed with U.S. regulators while misleading European regulators.” – ‘Secret Docs’ Show Monsanto’s Attempt to Influence Writers, Bribe Scientists https://www.ecowatch.com/monsanto-glyphosate-cancer-2468647604.html

The health, environment, and agriculture authorities of most nations recognize publicly that no blanket statement about the safety of all GMOs is possible and that they must be assessed on a ‘case-by-case’ basis. Dr. Oduro’s astonishing claim that “Genetically Modified Organism (GMO) foods are safe to eat and has no health risk for consumers”, is clearly misleading and misrepresents or outright ignores the currently available scientific evidence and the broad diversity of scientific opinions among scientists on this issue. The real problem here is that such a claim further encourages a climate of complacency that could lead to a lack of regulatory and scientific rigour and appropriate caution, potentially endangering the health of humans, animals, and the environment.

A Senior Research Scientist at the Biotechnology and Nuclear Agriculture Research Institute of the Ghana Atomic Energy Commission, Dr Vivian Oduro has stated that Genetically Modified Organism (GMO) foods are safe to eat and has no health risk for consumers.

She explained that genetic modification also known as genetic engineering involves the transfer of genes that are pest and disease resistant from one crop into the other to improve productivity.

Organised by the National Biosafety Authority (NBA) in partnership with PBS under the auspices of the US Embassy in Accra, the training workshop was to build capacity of journalists on genetic engineering to enable them report accurately on the subject.

Anti-GMO campaigners claim genetically modified foods are not healthy and safe to consume.

The Senior Research Scientist said genetic engineering was an improved form of conventional breeding, which involves the transfer of an interest gene to another crop.

She said genetic engineering was fast and efficient unlike conventional breeding which took several years for scientists to come out with an improved breed.

Dr Oduro, for example indicated that maize had undergone several genetic transformation to get the current breed of maize.

The Senior Research Scientist said genetic engineering was meant to come out with crops that were disease, pest, and drought resistant to boost the productivity of farmers.

She said the threat of climate change had created the need to develop crops that were disease, pest and drought resistant, adding that genetically modified crops reduce the cost of food production to the less use of pesticide, insecticide, and fertilizer.

SADC Regional Director of Africa Harvest Biotech Foundation International, Daniel Kamanga who spoke on the “Application of Biotechnology around the World,” said biotechnology was one of the best solutions to address agricultural problems in Africa.”GM is one the technologies Africa must use to solve Africa’s agricultural challenges.,” he said.

He defined GMO as a product of more precise breeding that enables a scientist to take a trait found in nature and transfer it to another plant.

Mr Kamanga said there were 185.1 million hectares of biotech crops being cultivated in 26 countries by about 18 million farmers, adding that “biotech crops increased 110 fold from 1996 to 2016.”

Some of the GM products being cultivated are corn, soybeans, cotton, canola, alfalfa, sugar beets, papaya, potatoes and squash.

He urged the media to sustain the discussion on GMO and highlight on its benefits to encourage the adoption of the technology by the government.

The Chief Executive Officer NBA, Mr Eric Okoree said NBA which was established in 2011 became operational in 2015 to promote Biosafety issues in the country.

He said a Biosafety Act, 2011 (Act 831) was to ensure the proper regulation of biotechnology in the country.

Mr Okoree explained that the Act outlines elaborate and string procedures before a GM product/crop could be imported into the country or undergo trials.

He entreated government to adequately resource the authority to deliver on its mandate. 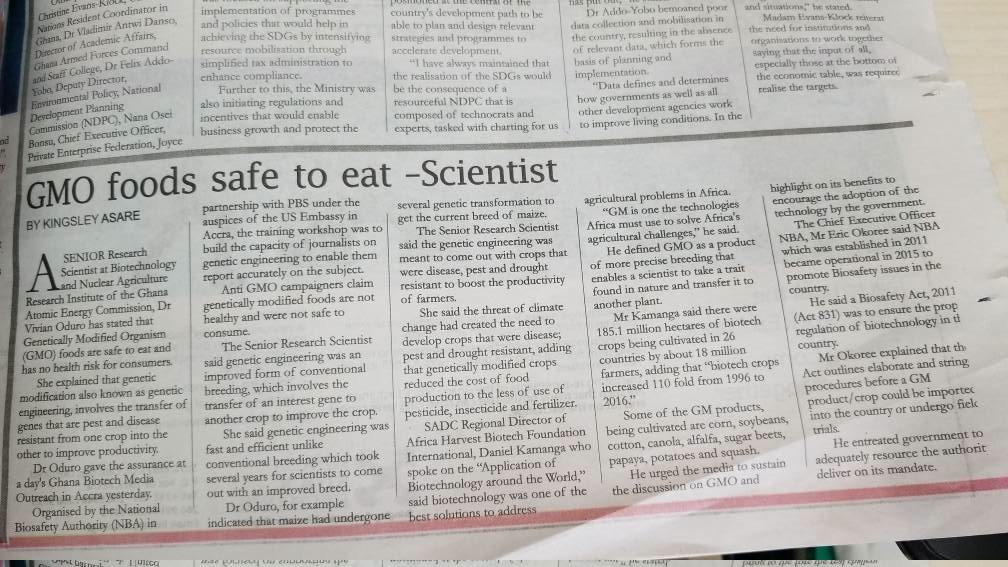