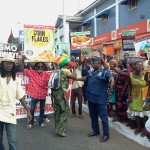 It has come to our attention that the Plant Breeders’ Bill PBB, appears on the Parliamentary Business Statement for the Second Week Ending Friday, 14, November, 2014. We therefore seek to take this opportunity to to call on Parliament to do the right thing and reject the Plant Breeders’ Bill in its current form. We consider it an indictment on Ghana’s Parliament that such an extremely bad  bill could even travel through the First and Second Readings to reach the Consideration Stage!

“I have received a number of petitions relating to the Genetically Modified Organisms and the Plant Breeders Bill. I have also taken note of the fact that the Biosafety Act, Act 831 which was enacted in 2011 made provisions for the establishment of a regulatory body that is the National Biosafety Authority to deal with most of the concerns raised in those on the Genetically Modified Organisms. Indeed the objectives of the Act provided in section 2 are:

(a) To ensure an adequate level of protection in the field of safe development transfer, handling and use of genetically modified organisms resulting from biotechnology that may have an adverse effect on health and the environment and

(b) To establish a transparent and predictable process to review and make decision on genetically modified organisms specified in paragraph (a) and related activities.

I would therefore refer this matter to the Leadership to consider and advise the Chair accordingly.

We find the reasons given by the Speaker to be sufficiently alarming and misleading. Apart from the issues with the imposition of GMOs on Ghanaians without any public awareness and participation, there were also substantial matters raised pertaining to intellectual property rights – IPRs.

We wish to take this opportunity to re-iterate some of these points, as the reasons the Speaker presents show him to be ignorant of the contents of the petitions, and he appears not to have read, or not to understand the contents of the Plant Breeders Bill.

For example, at the meeting with the Parliamentary Committee  on Constitutional, Legal and Parliamentary Affairs, on Wednesday, 4th December, 2013, Food Sovereignty Ghana FSG made several appeals. One of them was a call on the Parliament to delete Clause 23:

”23 Measures regulating commerce.
A  plant breeder right shall be independent of any measure taken by the  Republic to regulate within Ghana the production, certification and  marketing of material of a variety or the importation or exportation of the material.”

The objections by FSG to this particular clause were unassailable. And to date, Parliament has failed to make the records of our meeting public! The FSG petition recommends “ix/ Delete Section 23 on Measures  regulating commerce.” FSG position to Parliament was that it is important for the Bill  to be coherent with other legislation and national interests such as the  protection of environment, health, prevention of misappropriation of  genetic resources etc.

We argued that the inclusion of Clause 23 hinders the ability to achieve such coherence as it views the grant of PBR as being independent from other regulations. Our point was that in certain cases it may be important to refuse to grant PBR over a variety, particularly where national interests are at stake. Such situations include not granting PBR on varieties that are injurious to public health, environment etc or where the application does not  disclose the origin of the genetic material.” See: COMMUNIQUÉ: FSG Meets Parliament Over Plant Breeders’ Bill | Food Sovereignty Ghana http://foodsovereigntyghana.org/communique-fsg-meets-parliament-over-plant-breeders-bill/

And whilst he is at it, we also call on the Speaker to show which section of the Bill allows the Biosafety Authority to “regulate within Ghana the production, certification and  marketing of material of a variety or the importation or exportation of the material” since the bill makes these rights of the plant breeder independent of any law of the land!
We insist and demand that clause 23 be amended to read:

”23 Measures regulating commerce.
A  plant breeder right shall be subject to any measure taken by the  Republic to regulate within Ghana the production, certification and  marketing of material of a variety or the importation or exportation of the material.”

This change is crucial, if Ghana is to escape needless litigations and inevitable judgement debts, as well as the theft of our sovereignty by unscrupulous and rapacious foreign multinational corporations!