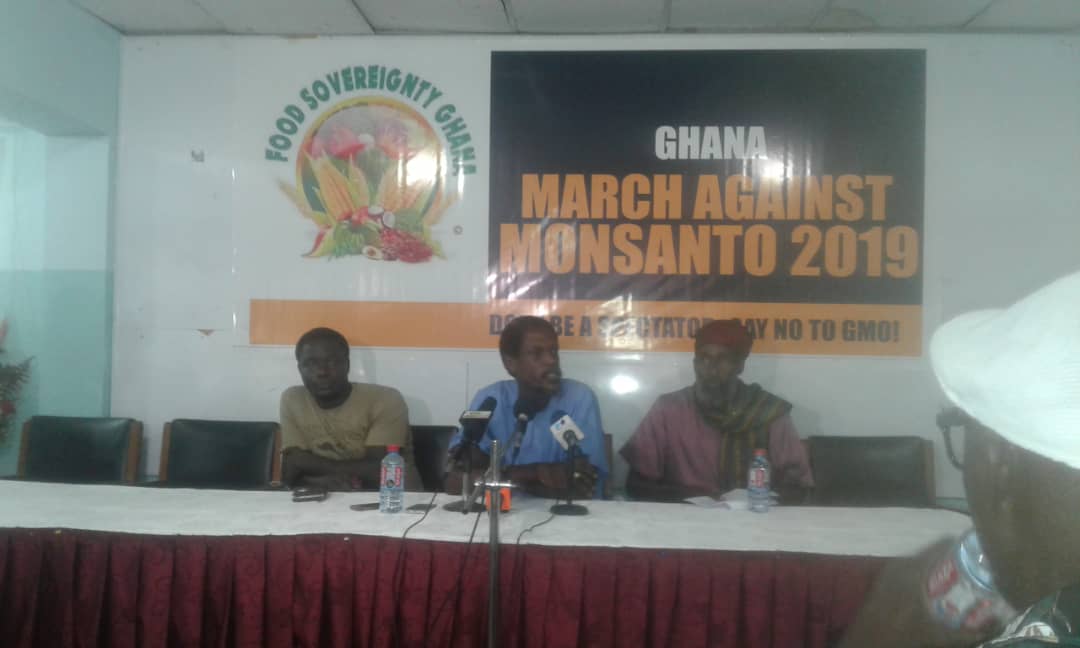 Solidarity with March Against Monsanto Accra Saturday 18th May

Good morning, Ladies and gentlemen of the press, friends and members of Food Sovereignty Ghana (FSG).  I would like to start by thanking you sincerely for honouring our invitation this morning.  I must also hasten to thank the members of the general public who have made time to attend. On behalf of FSG I thank Ghanaians for the overwhelming show of support following the court ruling on the jurisdiction of our case in the Human Rights High Court earlier this week. Our Facebook has been literally inundated with thousands of messages of support and congratulations. Ghanaians are clearly paying attention, and it is a shame that our politicians are not!

In respect of the annual ban on drumming and noise making within the Ga traditional area where Accra is located, this year we will avoid the challenges that arise from the temptation of our passionate participants to raise their voices while we ply through the approved route of our march.  We have thus decided to engage Ghanaians with our important message through a press conference instead.

Food Sovereignty Ghana stands today in solidarity with hundreds of cities and millions of people around the world against the unethical and destructive corporate practice of Bayer Monsanto.   This is the fifth consecutive year we have observed and supported this important event of global relevance and we continue.

March Against Monsanto, is an international grassroots movement against Monsanto Corporation, in protest at the company’s practices of using their affluence to influence the outcome of legislation, regulations, research findings, media narratives, etc. The movement was founded by Tami Canal in response to the failure of California’s Proposition 37, a ballot initiative which would have required labelling of food products made from GMOs. Monsanto was reported to have poured in $7,100,500 to help narrowly defeat California’s *Proposition 37.  On June 7, 2018 German pharmaceutical giant Bayer bought Monsanto for $63 Billion.

FSG has for the past six years been advocating against the introduction of genetically modified organisms (GMO) in our agriculture and moved to the law courts in 2015 at the first announcement of plans to commercially release genetically modified cowpeas and rice on the Ghanaian market by government agencies. This position has not changed due to the amount of overwhelming evidence in independent research that clearly points to negative impacts on health and the environment of GMO despite the attempts to legitimize it by a strong and well-funded lobby.

We wish to recognize at this point the wide coalition of stakeholders who have aligned with our concerns about the introduction of GMO into our food system.  These include the Christian Council of Ghana, The Catholic Bishops Conference, The Ghana Muslim Mission, The Office of The Chief Imam, The Peasant Farmers Association of Ghana (PFAG), The Convention People’s Party (CPP), the Vegetarian Association of Ghana, the General Agricultural Workers Union (GAWU) of the Trade Union Congress, the Rastafari Council of Ghana, Center for Indigenous Knowledge and Organizational Development (CIKOD), and Food Span among others.  Posterity shall surely be kind to your principled position you have all taken in the interest of today’s children , the environment as well as future generations.

In the words of A. Samsel “We arguably, are faced with the most serious scientific fraud in the history of science and hazardous technologies. The multi-dimensional impacts of GMOs are staggering and they are global. These translate into a biosecurity threat of global proportions, a threat by “Monsanto and chemical companies, who continue to destroy the biosphere”

According to the Guardian newspaper of May 15, 2019, a landmark decision, by a California jury in the USA  awarded a record $2.055 Billion in damages and compensation to a couple after it was proven that the controversial products of Bayer Monsanto had caused their non- Hodgkin’s lymphoma (NHL).  This is a clear vindication of the position that FSG has held since its inception that the company due to its unethical corporate record should not be trusted.  Bayer Monsanto is the largest agrochemical entity globally and is the lead driver for countries especially developing ones like Ghana to adopt their GMO technology where the seeds have been engineered to tolerate these dangerous chemicals like glyphosate.

After all the sound research that has informed our position against GMO, as a responsible civil society organisation, we have no choice but to seek the endorsement of Ghanaian citizens to support a mandatory labelling regime for food made from GMOs.   Apart from countries like Argentina, India and Brazil, we also have the benefit of learning from our own neighbour Burkina Faso who recently experienced a five year disaster in growing GM cotton and has now resorted to conventional strains that are providing higher yields and debunking the myths peddled by the pro GMO lobby.  The documented resistance of the Boll worm to GM maize in the US and the pink boll worm to GM cotton in India respectively go to show the fact that such unintended risks associated with GMO’s should better inform our policy makers as early warning signs.  This puts into true context the efforts of organisations like the  Alliance For Science as well as the Open Forum for Agricultural Biotechnology (OFAB) who despite all these real facts are desperately trying to deceive Ghanaians that GMO would be of great benefit to Ghana.  The truth is Ghana’s agriculture is challenged by a lack of road infrastructure from farm gate to market, a lack of credit to farmers, lack of irrigation interventions and little post-harvest infrastructure to preserve the abundant harvests our farmers get.  The introduction of GMO’s will not address any of these critical concerns.

We support the call for labelling but since GMOs are yet to be cultivated in Ghana, we go beyond the call for labelling in demanding an indefinite moratorium on or a ban on all GM foods in Ghana! We take note of the debate going on at the Food and Drugs Administration (FDA) Ghana, to introduce voluntary labelling rather than mandatory labelling of GMOs, and reiterate our demand for mandatory labelling of everything GMO in the food chain of Ghanaians.    We are further encouraged by a recent ruling in the Human Rights High Court where Ghana’s first case concerning biotechnology is being heard.  This week the court ruled that FSG had properly invoked the jurisdiction of the High Court in seeking its remedies as submitted.

FSG is encouraged by studies such as the International Assessment of Agricultural Knowledge, Science and Technology for Development (IAASTD), a project developed out of a consultative process involving 100 countries and more than 400 experts who come out clearly to play down any meaningful role biotechnology could play in meeting the food needs of our growing populations, and in the light of the challenges posed by climate change. The IAASTD was launched as an intergovernmental process, under the co-sponsorship of the Food and Agriculture Organization (FAO); the Global Environment Fund (GEF); the United Nations Development Program (UNDP); the United Nations Environment Program (UNEP); the United Nations Educational, Scientific and Cultural Organization (UNESCO); the World Bank and the World Health Organization (WHO).”

We continue our call on HE President Nana Akufo Addo and his government to reconsider Ghana’s agricultural agenda where genetically modified organism (GMO) seem to be in the plans.  It is extremely worrying that Ghana is losing sight of a clear opportunity that has presented itself for us which is the growing organic produce market around the world.  We enjoy a comparative advantage to exploit this market which is valued globally at $97 Billion as at 2017.  https://www.statista.com/statistics/273090/worldwide-sales-of-organic-foods-since-1999/ .

It is therefore critical to keep reminding our key stakeholders of the dangers of doing business with BayerMonsanto’s products embedded in our plans given the current legal precedence that is being set in the US where courts of competent jurisdiction have found Monsanto liable for the damages caused by its flagship product “Round Up” with its toxic and carcinogenic ingredient Glyphosate.  The question is can Ghanaians afford the legal proceedings to arrive such logical conclusions?

We repeat our call on the administration of H.E .Nana Akufo Addo to orientate government policy on agriculture towards what all the experts are saying: agroecology. The technology currently exists that is developing drought-resistant, pest resistant and high yielding crops through traditional breeding and selection. Marker Assisted Agro-ecological farming is not only inexpensive, and sustainable, it is far more successful than GM technology.

Agro ecological techniques are already safely and inexpensively producing crops with increasing yields plus tolerance and resistance to environmental stressors. We should forget GMOs and concentrate on agro ecological agriculture. The only reason why our “development partners” are opposed to this is because their multinational corporations shall lose the attempts to monopolize our food through GMO patents. They see our agricultural wealth as raw material to be extracted from Ghana in order to power their economic engine. We need to control and develop our agricultural wealth to power Ghana’s economic engine.

We again use this opportunity to repeat our call on policy makers to reconsider the UPOV-compliant Plant Breeders’ Bill, (PBB).  Over the years given we have through several press releases maintained that  the bill in its current form is too rigid, unsuitable, and illegitimate and there are still forces ignoring our call for a “sui generis’ plant protection system as required by the World Trade Organisation (WTO) to protect the intellectual property of plant breeders.  In concluding our consultations with the Parliamentary select Committee on Agriculture in 2018, it was agreed between the CSO’s and  the honourable panel that in the interest of the significant constituency of farmers all over Ghana, legislators needed to take another look at the Bill.  During that particular meeting we recall the cooperation we received from the Late Honourable Emmanuel Agyarko to have an honest review.

In November 2018 we were privilegded to address the Economic and Special Development Intitaives Committee of the Council of State.  Three out of six of the distinguished panel were in agreement with the position we presented and we are encouraged that Ghanaians at all levels of our society are giving us great support as they understand the real issues.

Ghana is at a cross roads and must make some very sound and well informed decisions.  Given the fact that we live in the age of information there is no excuse for a whole nation not be well informed from a policy, making perspective given the overwhelming evidence especially produced by independent researchers.  We are confident that given the past human rights record of H.E President Nana Akufo Addo, there is still hope where the welfare of Ghanaians is concerned.