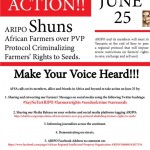 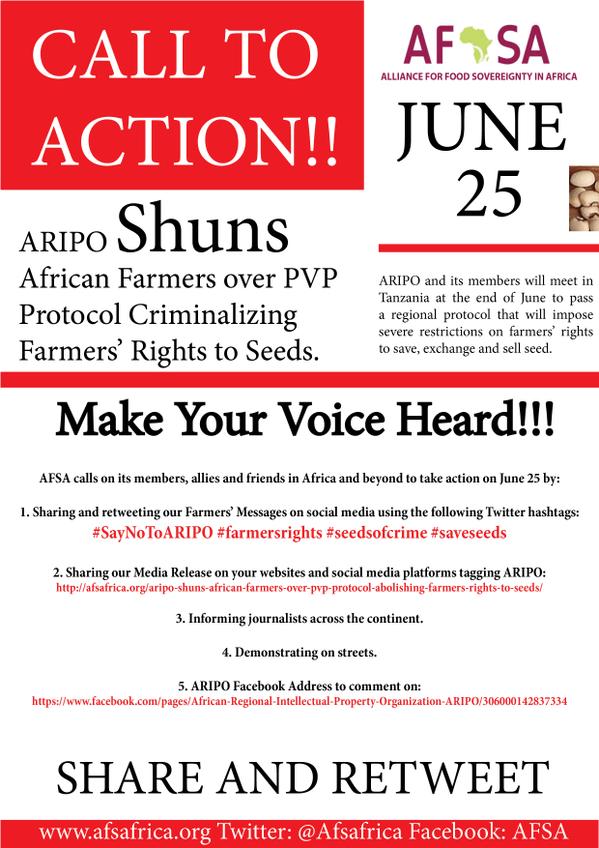 Ghanaian citizens have so far prevented the passage of the Plant Breeders Bill, a UPOV-91-compliant law that would strip Ghanaian farmers of their rights to their own seeds. But there is worse coming from the African Regional Intellectual Property Association (ARIPO). To Ghana’s great credit, and despite determination and pressure from the G7, USAID and its contractors, despite the willing and enthusiastic cooperation of Ghana’s Ministers, Attorney General, and both major political parties, Ghana has refused to pass a farmer destroying, sovereignty busting, UPOV law.

Ghanaian farmers and citizens are not falling for the International Union for the Protection of New Plant Varieties (UPOV) con. The G7, USAID, Big Agribusiness, and Ghana’s government and academic elites intend to go around the democratic process and force an end to Ghana’s agricultural sovereignty.

If they can’t pass a UPOV law within the country, they will impose it from outside. At the African Regional Intellectual Property Association (ARIPO) Diplomatic Conference in Arusha, Tanzania, this coming Monday, 29th June to 1st July 2015, ARIPO plans to adopt the highly contested draft ARIPO Plant Variety Protection Protocol (ARIPO PVP Protocol), based on UPOV 1991.

This is clearly an undemocratic attempt to smuggle the obnoxious UPOV-compliant Plant Breeders’ Bill through the back door! Ghana’s farmers and citizens demand seed sovereignty, and clearly oppose GMOs and the deadly chemicals that are an integral part of commercial GMOs. The agribusiness corporations are chemical corporations. So they breed seeds that require you to buy and use their chemicals. This is unhealthy and piles debt on farmers. It takes money from the hands of poor farmers, takes it out of Ghana, and gives it to western corporate shareholders.

If the draft ARIPO PVP Protocol is to be adopted without changes, ARIPO and any ARIPO member that ratifies the Protocol can join UPOV 1991. This means that any member state of ARIPO can simply side-step national consultation processes and ratify the ARIPO Protocol, and in doing so, give up its national sovereignty to a centralized decision-making authority, and further, become a UPOV 1991 member, all in one foul undemocratic swoop. It is unconscionable that Ghana’s government should have any part in this despicable subversion of democracy.

The Alliance for Food Sovereignty in Africa, AFSA, is of the view that the whole process of developing the draft Protocol is fundamentally flawed, has been extremely un-transparent, and thus lacks credibility and legitimacy. Farmers and civil society groups have been cut out, and denied participation.

The principal aim of the ARIPO PVP Protocol is to create a harmonized regional plant variety protection system within the region in order to give prominence to breeders and place restrictions on seed/varieties protected under such a system. Such protected varieties are bred and sold to farmers through seed companies and other private entities and government/private led subsidy agricultural programmes. The main goal is to facilitate the capturing and control of all seed so that private companies can make profits by forcing farmers to buy seed and pay royalties.

By seizing intellectual property rights to Africa’s seeds, taking African seed DNA, manipulating it in a laboratory, then claiming all rights to the seeds and their successive generations, western corporations are attempting one of the greatest thefts in human history, the theft of the entire agricultural base of all the countries of Africa.

Ghana’s government has been falling over its own feet in its attempt to pass the UPOV-91-compliant Plant Breeders Bill. It can get the same law imposed simply by ratifying the ARIPO PVP Protocol. Ghana then automatically loses sovereignty over its seeds and farms and gives up control to multinational corporations. Those governing Ghana appear to think this is a good thing.

Ghana is a primary target of the G7 sponsors of the multinational agribusiness corporations. Ghana’s government has been wooed and flattered, Ghana’s scientists have be funded and flattered, and members of the press have been feted and misinformed. A variety of trips, cash awards and contributions have helped grease the wheels of government, academia, and the press, convincing them that Big Agribusiness is the way of the future and money in the bank. This con has been going on in all the countries of Africa. The idea is to form a consensus among governing and academic elites to believe they know what is best without consulting the farmers and consumers whose lives and livelihoods depend on their decisions. In fact they quite intentionally and deliberately withhold information from farmers and citizens and cut them out of the discussions so there will be no debate.

The ARIPO PVP Protocol is a tool for the foreign takeover of Ghana’s agriculture. It is a template for the takeover of all African agriculture, seeds, farms, land, and water. It will be a grievous blunder for Ghana to participate in such a sell-out which bars even the representatives of African civil societies, such as AFSA, to attend! We are astonished that the President of Ghana is saying nothing about this instead of calling for a revision of the ARIPO PVP! Under the WTO regulations, Member States of ARIPO, many of whom are Least Developed Countries are not even obliged to put any PVP legislation in place until 2021. No one needs it in Africa except greedy foreign multinational corporations of doubtful intentions and abilities.

We strongly support AFSA’s calls that the Diplomatic Conference be postponed indefinitely, and be subjected to a thorough evidence-based impact assessment/cost-benefit analysis, taking into account the conditions prevailing within the ARIPO region as well as meaningful national consultations involving all key stakeholders, especially smallholder farmers. These demands are fully supported and required by international law, particularly the International Covenant on Civil and Political Rights, the Convention on the Elimination of All Forms of Discrimination against Women and Article 9(2c) of the International Treaty on Plant Genetic Resources for Food and Agriculture.

The overwhelming rejection by Ghanaians of the UPOV-compliant Plant Breeders’ Bill, is what ought to inform the external commitments by the Mahama Administration. We find it amazing that the government is going to go to this diplomatic conference and agree to a regional treaty that is controversial nationally. It especially insensitive on the part of a constitutionally elected President of the Republic of Ghana to oversee this undemocratic procedure adopted to rob us of our sovereignty as a people. We put the blame squarely on the shoulders of the President and call on him to declare Ghana’s position for public scrutiny. Incidentally, Ghana is one of the three countries ARIPO is looking up to for leadership.

We call on the President to publicly demand the revision of the draft ARIPO PVP Protocol in order to comply with the more flexible effective sui generis requirement of TRIPS Article 27.3(b), as well as including provisions that recognise farmers’ rights and facilitate the right to food. This revision should be based on a much broader consultation process and by making use of experts from outside of the plant breeders’ rights sector.

We call on all Ghanaians determined to live in peace and in dignity, to add their voices to this call until we hear from President Mahama! There are only a few days left before Monday, when it all begins!