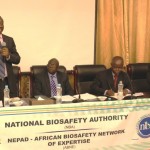 USAID continues its efforts to deceive Ghanaians, Nigerians, and the citizens of all the developing world with its attempts to persuade people that genetically engineered crops are safe. The health effects of genetically engineered (GE) crops, genetically modified organisms (GMOs), are questionable, their nutritional value is questionable, future and generational effects are unknown, and the toxic chemicals that 99% of commercial GE crops require poison us all.

USAID is offering a workshop: “International Biosafety Short Course for Policy and Decision Makers in Ghana and Nigeria” (http://www.nepadbiosafety.net/international-biosafety-short-course-for-policy-and-decision-makers-in-ghana-and-nigeria) at University of Ghana, Legon, scheduled for 28 Jul 2015 here in Accra. This course has nothing to do with safety. The real purpose is to lobby the regulators,  and to find ways to circumvent the advance informed agreement procedure of the Cartagena Protocol on Biosafety, CPB, to the Convention on Biological Diversity, CBD. It is an effort to override and ignore vital biosafety protocols such as public awareness and participation, risk assessment/management, socio-economic impacts, and more.  It is only one of a series of this same workshop in a number of USAID targeted African countries.

USAID does not want you to know about their efforts. They want to make this look like just another bland academic seminar, pretending they are just here to help.  Instead the workshop is a ruthless effort to convince Ghanaian officials to evade and ignore the biosafetyintention of Ghanaian law and the letter of the law itself.  GMO interests want to get their agenda in place fast, locked into Ghanaian law, before the Ghanaian people catch on. USAID is acting as lobbyist for Monsanto and its friends in the Agro Chemical industry.  USAID is attempting to force Ghanaian farmers and Ghanaian agriculture under the control of foreign corporations. They are doing this with flagrant disregard for the Precautionary Principle enshrined in the Cartagena Biosafety Protocols.

“Ultimately, it is the food producer who is responsible for assuring safety”.
– FDA, Statement of Policy Foods derived from New Plant Varieties, 29 May 1992

“Monsanto should not have to vouchsafe the safety of biotech food. Our interest is in selling as much of it as possible. Assuring its safety is the FDA’s job”.
–  Phillip Angell: Monsanto Director of Corporate Communications: (Pollan: NY Times Magazine 25 Oct. 1998) (1)

“Monsanto, DuPont, and Syngenta—now control 53 percent of the global commercial seed market. 86% of corn, 88% of cotton, and 93% of soybeans farmed in the U.S. are now genetically-engineered (GE) varieties, making the option of farming non-GE crops increasingly difficult (Centre for Food Safety CFS) Report 201379)”  (1)

“The advent of GM crops has become the gateway to controlling seed germplasm, and it is threatening the genetic diversity of crops. … Conventional seeds have been shown to improve yields by as much as 30 percent as compared to Monsanto’s drought tolerant seeds, which provide only about 5 to 6 percent increase.” (1) And that 5%-6% is only under optimum conditions.

GMO interests are looking to control seed supply in Ghana and the entire developing world as well.  That is the reason for legal initiatives such as the Ghana Plant Breeders Bill and the ARIPO Arusha Protocol. It is the reason for the propaganda blitz misrepresented as biosafety education.

With its 1992 decision neither to test or regulate GMOs, the USDA moved from its traditional role of supporting and assisting farmers to its current role of supporting and assisting the Agribusiness industry, often against the interests of farmers. This left the safety of the US food supply entirely in the hands of Monsanto and friends. The conflict of interest is obvious and massive. US farmers and consumers endure the results. This is what USAID is trying to sell to Ghana and the developing world with its biosafety education workshops.

USAID is trying to push Substantial Equivalence as a “standard” across the developing world.  This is a clear and glaringly obvious violation of the Precautionary Principle enshrined in the CPB to which Ghana is a signatory.

Another concept USAID is pushing in its biosafety workshops is GRAS, Generally Recognized As Safe. The FDA, the American Food and Drug Administration regulates food additives. Additives designated as GRAS, often by the industry that manufactures them, are exempted from the FDA food additive tolerance requirements.

This is another so-called standard that USAID is pushing on Ghana as part of its “biosafety education”.More than 99% of GE/GM crops are pesticide crops, either Bt (contain bacillus thuringiensis) or HT (herbicide tolerant).  None are engineered for increased yields.

The US Department of Agriculture’s Review of 10 years of GM crop cultivation in the States, which has the longest history of GM crops, has concluded: “Currently available GM crops do not increase the yield potential… In fact, yield may even decrease if the varieties used to carry the herbicide tolerant or insect-resistant genes are not the highest yielding cultivars… Perhaps the biggest issue raised by these results is how to explain the rapid adoption of GE crops when farm financial impacts appear to be mixed or even negative.” USDA. (1)Yet this is what USAID is trying to sell to Ghana and the developing world with its biosafety education workshops. GMO yields decrease over time for other reasons as well, mostly related to the environmental effects of the pesticides. GE is not needed and does not offer solutions. “GMO contamination is certain with a commercialized crops and is irreversible. Therefore, co-existence between GM and Non-GM crops is not possible. On its own, this effectively eliminates GMOs from being a solution for food security and of course safe food.” (1)

USAID biosafety “education” efforts train policy makers to ignore the Precautionary Principle, even though it is already part of Ghana’s law as a signatory to the CPB.

The massive national and global threat posed by GMOs makes applying the Precautionary Principle critical to any decision making regarding GE crops, GMOs.

Distinguished Professor of Risk Engineering Nassim Nicholas Taleb writes “The precautionary principle (PP) states that if an action or policy has a suspected risk of causing severe harm to the public domain (affecting general health or the environment globally) the action should not be taken in the absence of scientific near-certainty about its safety.  Under these conditions, the burden of proof about absence of harm falls on those proposing an action, not those opposing it.”   The PP is intended to guard us against “unforeseen and unforeseeable events of extreme consequence where there is little current evidence or scientific knowledge.” (2)

Ruin is forever. “When the impact of harm extends to all future times, i.e. forever, then the harm is infinite … it cannot be balanced against any potential gains” (2)

It is this widespread systemic risk that USAID is promoting with their biosafety education workshops.

Ghana must abide by its own laws and apply the Precautionary Principle. Say NO to massive impact on our health and our environment.  Say NO to GMOs.
For Life, the Environment, and Social Justice!Edwin Kweku Andoh Baffour
Communications Directorate,

Sources:
(1)  Rodriguez, Aruna, 2015, The Fraud of GM Crops – The Scientific Evidence
Published with permission at: http://foodsovereigntyghana.org/the-fraud-of-gm-crops-the-scientific-evidence-by-aruna-rodrigues/
PDF link: http://foodsovereigntyghana.org/wp-content/uploads/2015/06/The-Fraud-Of-GM-Crops-%E2%80%93-The-Scientific-Evidence-Aruna-12-jun-section-5.pdf
Aruna Rodriguez is the lead petitioner Public Interest Writ (PIL) in the Supreme Court of India for a moratorium on GMOs.

Much reading of many documents by many people contributed to this article.  The two sources listed above proved particularly valuable. Both contain very useful bibliographies.